Roots of the wolf

Paul Naschy was born on September 6, 1934 in Madrid, Spain. His birth name was Jacinto Alvarez Molina. The Spanish Civil War broke out shortly after his birth, lasting from from July 1936 to April 1939. It was a violent war that affected the entire country, and an estimated 500,000 lives were lost during the conflict. 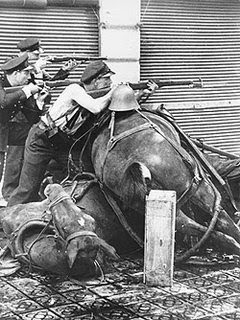 The post-war years had to make for a tough childhood. A new authoritarian, fascist regime had taken over and the country was trying to rebuild itself. Add to that World War II, which lasted from 1939 to 1945, and this was a highly volatile period of young Jacinto’s life. Spain was able to avoid directly entering WWII, but they were in constant danger of being dragged into the conflict, especially with fighting taking place in nearby France and Hitler demanding Spain join the Axis forces. There was warfare in Jacinto’s life until age 11 – a difficult thing to imagine nowadays.

During these years movies were a rare treat that Jacinto’s mother would take him to when possible. One can imagine how much these afternoon escapes must have meant to him. A chance to get away from the horrors of real life and disappear into a darkened room for an hour and a half (or so) must have been bliss, especially when the movie was one such as young Jacinto saw one afternoon at age 11.

Universal released the first of its monster rallies, FRANKENSTEIN MEETS THE WOLFMAN, in March of 1943. Studies have shown that during times of warfare there is an increase in production of horror films, and this was definitely the case with Universal in the 1940s, which put out no less than 23 horror pictures from 1939-1945. A print of FRANKENSTEIN MEETS THE WOLFMAN made its way from America to a theater in Madrid, Spain, in 1945, and it was there that a future film legend was born. 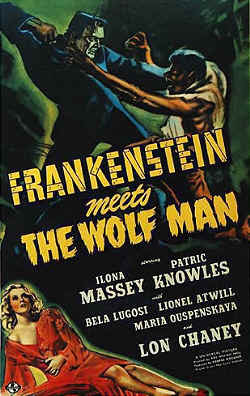 This film made a major impression on Jacinto and would later be cited by him as a leading influence on his own horror film career. I wonder what writer Curt Siodmak would say about his film being the catalyst for a future film legend? I also wonder if Naschy ever got a chance to meet any of the folks responsible for FRANKENSTEIN MEETS THE WOLFMAN, such as actors Lon Chaney and Bela Lugosi, writer Siodmak, or makeup artist Jack Pierce, whose amazing wolfman makeup undeniably influenced his own werewolf makeup as character Waldemar Daninsky.

Jacinto got into the film industry at age 26, working for years in mostly uncredited roles until 1968 when he made the first of his werewolf pictures, LA MARCA DEL HOMBRE-LOBO, a.k.a MARK OF THE WOLFMAN, best known as FRANKENSTEIN’S BLOODY TERROR, a film he himself wrote and starred in. This was the first of two werewolf pictures he would make that year, the other being LAS NOCHES DEL HOMBRE LOBO, a.k.a. NIGHTS OF THE WEREWOLF.

The influence of that fateful day in a movie theater in Madrid certainly showed through as Jacinto created a character that would go on to 12 “sequels:”

So besides being a terrific film (it is one of my favorite Universal pictures), the fact it inspired young Jacinto to go on to an influential career as a horror star is yet another reason to love FRANKENSTEIN MEETS THE WOLFMAN.

You know, it’s ironic to think that, in a sense, Lawrence Talbot created Waldemar Daninsky. What is it that the old gypsy, Maleva, said in the first Wolf Man movie? “Whoever is bitten by a werewolf and lives becomes a werewolf himself.” Well, young Jacinto was bitten by a werewolf in that theater in 1945, and the curse came full circle with Frankenstein’s Bloody Terror in 1968. Who knows how many others Waldemar has, in turn, “bitten,” and so the curse continues…

Here’s to Waldemar and Lawrence, may they stalk the silver screens forever.
at Thursday, December 02, 2010