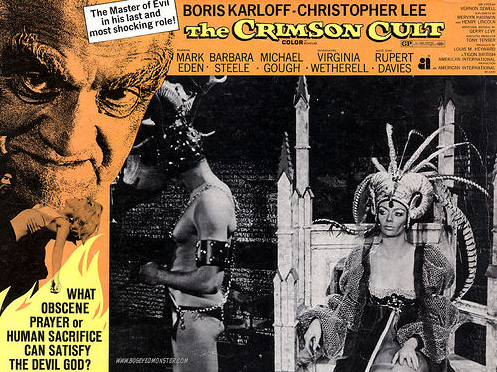 I totally forgot that I had planned to implement a new rating system here on the blog! I was looking for an old post last week and ran across this rating system. I used it once then promptly forgot about it! Absent minded professor’s got nothing on me! Looking at it again a year later I think it’s a pretty cool system, so I am announcing once again the following Rating Scale:

Medical Mishap (Close but not quite there yet)

The first movie I want to review with this scale is one I just watched this week on Netflix streaming. Man I love Netflix. Despite its contribution to the demise of local video stores (which I still miss terribly, but it was inevitable) I love the convenience of watching movies at home with the click of a button. While it is frustrating that not everything is available streaming, there are still a lot of interesting and quirky films, and a lot of movies I’ve always wanted to see. Such as today’s movie:
THE CRIMSON CULT 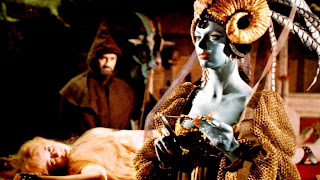 Known better under the UK name Curse of the Crimson Alter, it was shot in 1968 and stars Boris Karloff, Christopher Lee, Mark Eden, Barbara Steele, Michael Gough, Virginia Wetherell, and Rupert Davies. Talk about a terrific cast! This was the last film Boris made in the UK, and was in fact the final film he shot before the trio of cheap Mexican films made just before he passed away in 1969. It was released in theaters in 1970. 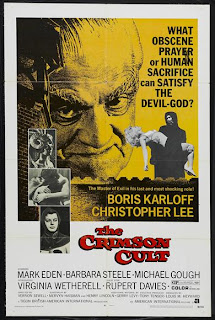 Mark Eden stars as Robert Manning, an antiques dealer investigating his brother’s disappearance. His brother’s trail leads to the village of Greymarsh and an out of the way country estate called Craxted Lodge . The owner, Mr. Morley (Christopher Lee) invites him to stay the night as the town lodgings are all booked up. You see, the history of this village is steeped in witchcraft, and they hold an annual celebration of the burning of a witch named Lavania Morley (who is actually Lee’s ancestor). Manning has arrived the very weekend the celebration is taking place, and it is slowly revealed that he is the last living survivor of the villagers who executed Lavania. Ah, the plot thickens! Karloff plays Professor Marshe, an expert of witchcraft and close personal friend of Morley’s. His character is wheelchair bound, (as he himself basically was by this point of his career), and has a mute assistant named Basil who pushes him around in his wheelchair. Michael Gough is the strange, stuttering, dim-witted servant of the house. Add to this eclectic mix Morley’s attractive niece, Eve, (Virginia Wetherell) who is throwing a groovy swinging sixties bash at the house when Manning arrives.

Once at the estate Manning begins having vivid dreams of bizarre sorcery rituals with a strange green-skinned witch (Barbara Steele) leading the procession. Together with Eve’s help Manning begins to unravel the secret of his brother’s disappearance and its ties to the legend of the Morley family and their background. 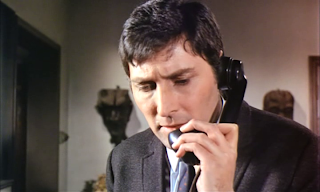 The story structure of this movie reminds me of another film starring Christopher Lee called Horror Hotel (a.k.a. City of the Dead), in which a girl heads to a small town to investigate her sister’s disappearance. Both films deal with witchcraft and Lee actually plays a somewhat similar role in each. Despite some story flaws the one thing this movie has going for it is the cast – seeing these genre icons together in one film is really fun, and I especially enjoyed the scenes with Lee and Karloff interacting together. Barbara Steele is given little to do in this movie, however; she basically sits and looks pretty as the leader of the dream cult, spouting some mystic gibberish in an echoey voice – but her scenes are atmospheric and exotic looking nonetheless. 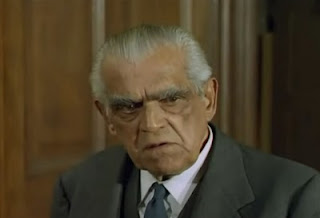 The movie doesn’t take itself too seriously, and at one point as Manning, talking about the creepiness of the old house, says, “It's like Boris Karloff is going to pop up at any moment.” You kind of have to love that bit of self-referential schlockiness, and the hippie party at the beginning of the film is a riot. Definitely dated but still fun. The American version of this movie is 2 minutes shorter with scenes of nudity excised, unfortunately. You still get a couple of nip slips and a butt shot but the UK version is complete at 89minutes. 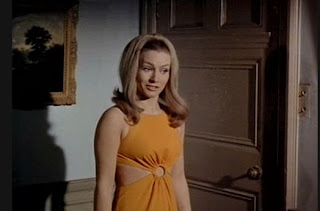 Overall I rate this film 3 out of 5 skulls, mainly for the cast and fun atmosphere of this film. I really enjoyed watching it.