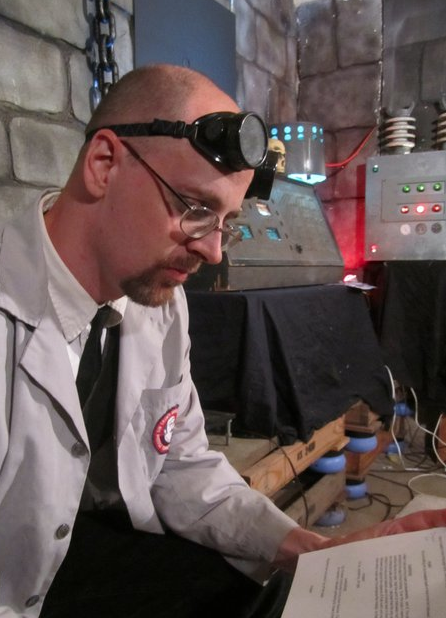 As we move into the New Year I thought I’d take a moment to reflect back upon 2011. It was a real year of ups and downs for me. Professionally it was one of my most successful seasons to date, with some of my biggest achievements realized this year:
2011 saw the DVD release of THE DREADFUL HALLOWGREEN SPECIAL through Alpha Video. This was collaboration with fellow horror host Penny Dreadful and her werewolf cohost/hubby Garou. It was a really neat project that began as a simple email question to Penny one day - “How would you feel about doing some kind of joint venture, a co-hosting project of some sort?” She liked the idea, we bounced ideas back and forth and took turns writing the script – I would write a segment, then send it to her, she’d write a segment then send it back, etc., until we had it finished. The finished project turned out to be something really special, and is available through ALPHA VIDEO here: http://www.oldies.com/product-view/1067D.html 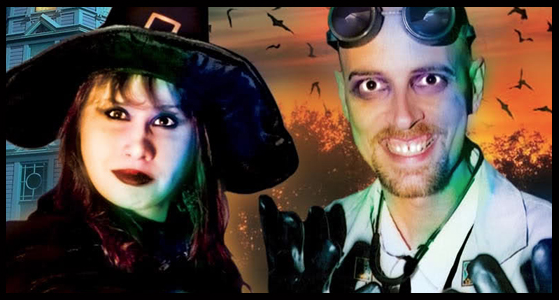 We also had another successful Wonderfest appearance and screened The Dreadful Hallowgreen Special live Saturday night there. It was really neat seeing it in a group setting and the crowd really seemed to like it and “got” all the jokes. Cameron McCasland (my director and partner on the show) and I headed to Louisville and had a blast. Especially cool was the fact that we were able to incorporate my good friend Bob Burns into the live show once again, thanks in large part to my buddy J. Sorrels, who built the amazing Bob-Bot, a robot sidekick with a front plate on it that looked suspiciously like an ipad skyping Bob from his house in Los Angeles!  We’ve been doing these live shows since 2004 and it just wouldn’t be the same without Bob, so I was thrilled to include him and the crowd loved it. 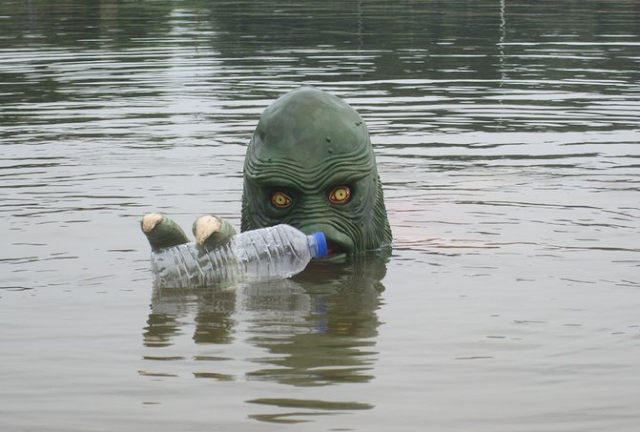 We filmed another batch of PSAs this season, which turned out great. This year’s batch included one with the Wolf man talking about pet leash safety, one with the Frankenstein monster talking about recycling plastic bottles, and one with the Frankenstein monster and the Creature from the Nashville Lagoon talking about littering and proper trash disposal. They’ve gotten a lot of airplay on Nashville’s CW58 and best of all they were nominated for TWO Emmy’s – one in the PSA category and one for Cameron in  the writing category! AND speaking of Emmys, we were also nominated for a third Emmy for the Dreadful Hallowgreen Special in the entertainment category! We will find out in March if we win, so we’re all keeping our fingers crossed.

One of the most unique and amazing things that has happened since I started this horror host adventure occurred in 2011 when Dr. Gangrene appeared in the Dick Tracy comic strip (as Dr. Mean Green – name changed slightly for copyright reasons)! This was something I definitely never foresaw when I started this venture and it’s a real bucket-list type event for sure. I still kind of can’t believe it happened and thank writer Mike Curtis for including me in this historic strip! 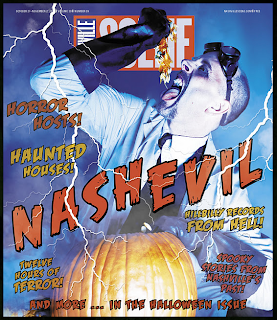 Dr. Gangrene became a cover-boy this year when the Nashville Scene put me on the front of their magazine for their Halloween issue! I have wanted to get on the cover of that paper for years, and it was a real surprise when they asked me to do it. This was one of my goals I wanted to achieve but was never able to until now – Sir Cecil Creape, the Nashville host from the 70s, was on the cover of the SHOWCASE, a section of the Tennessean newspaper that was formatted similarly (square-bound with a color photo on the front). That section of the paper has been retired, and the closest thing that exists in Nashville nowadays is the Scene. PLUS the Scene is the hip Nashville paper that all the cool kids read, and they cover all the cool events in town, so any chance for some coverage there is always welcome. It was an honor to be featured on the cover and the shot they chose – me eating the pumpkin guts – definitely wasn’t the one I thought they’d choose from that photo shoot. It was a pleasant surprise to say the least!

In conjunction with the Nashville Scene appearance I hosted a 12-hour film festival at the historic Belcourt Theater called 12 Hours of Terror featuring Night of the Creeps, Abby, Squirm, Lady Terminator, Zombie, and Return of the Living Dead. Definitely one of the coolest lineups of films ever assembled, and I was there the whole day hosting the event. Good times!!  (Zombie on the big screen was a religious experience). 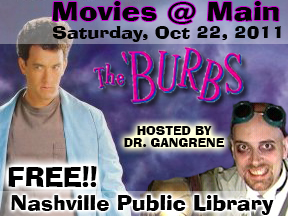 I also hosted the movie THE BURBS at the Nashville library this Halloween season. It was a great time and a good turnout. I also made appearances at the Nashville Zoo at Halloween to kick off their Ghouls at Grassmere event and the Nashville Horror and Comics Convention earlier in the month, too. 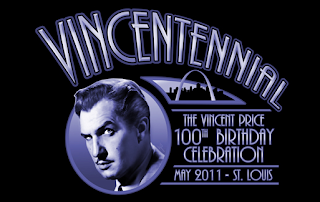 This was by far my most prolific blogging year ever. I wrote 239 blog posts last year, including 100 posts on Vincent Price in celebration of the Vincentennial (Vincent’s 100th birthday). 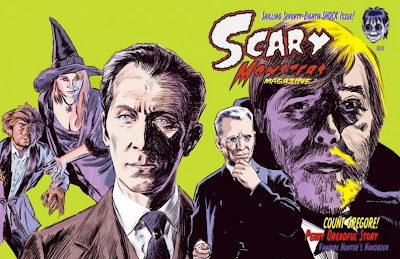 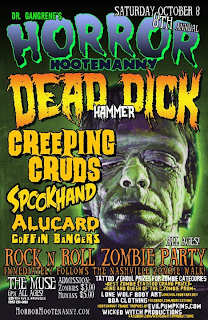 This year’s Horror Hootenanny was one of the best yet. We went back to a zombie theme this year and worked in conjunction with the Nashville zombie walk. We had a terrific turnout and great music all night from The Coffin Bangers, Alucard, Spookhand, The Creeping Cruds and my new favorites, Dead Dick Hammer and the TBA! We also had a ton of sponsors onboard this year who provided some fantastic giveaways – Unholy Apparel, Rue Morgue Magazine, Scary Monsters Magazine, Evil Pumpkins, Wicked Witch Productions, Terra Fossil Wines, Lone Wolf Body Art, the Coffee Pirate, and Unkle Pigors. Thanks to everyone who helped make this possible, as it takes a lot of work to pull it off - and special thanks to Jeano and Tanya Roid for everything they've done over the years to support Dr. Gangrene - the Horror Hootenanny was originally Jeano's idea, as a fundraiser for my show, and it's grown over the past 8 years to THE horror rock event in Nashville.
My band, Spookhand, also had a big year, and played quite a few shows including one in Dayton Oh with my good buddy A. Ghastlee Ghoul and his band SPLATTERTUDE. Thanks for all the hospitality, Ghastlee - that was some good chili! We also recorded a second EP this year (still gotta get that full length done some time) which we distributed at the Hootenanny. So it was a busy year for us! BTW - Special thanks to my good friend Mark Greenbaum for all his help throughout the year - he played along good-naturedly as the victim at the Spookhand shows, hopping onstage uninvited only to have a limb lopped off and spray the crowd with blood. Mark designed and built the fake hand/arm props, and also played a transvestite in The Dreadful Hallowgreen Special - now that's a multi-talented guy!! 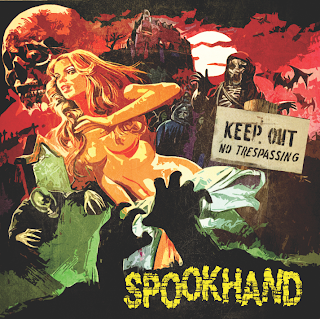 I also did several interviews throughout the year including HORROR SOCIETY,  RESEARCH MY TRASH,  and the MONSTERS FROM THE BASEMENT podcast . I also appeared on Nashville’s local NPR radio talking about my predecessor Sir Cecil Creape, in a piece written by my good buddy and fellow Creape fanatic, Randy Fox.
Most importantly of all starting in September we got back on the Nashville scarewaves with a new weekly show called Dr. Gangrene Presents. It airs Saturday nights at 1am (Sun morning) - I’m really enjoying the new format (half-hour) and this has been the most fun I’ve had producing the show to date. I am fortunate to work with Cameron, and the shoots are effortless and fun. This is the closest to what I envisioned when I first started the show, and we’ve aired 14 shows to date. Sometime this month we plan to announce a new time change to a better slot – details TBA.
On the personal side things were a bit shakier last year. My favorite uncle passed away at age 54 from cancer. That is way too young. I also found out my father (biological father – I was raised by my stepdad but over the past couple of decades reconnected with my real father) has cancer and probably has less than a year to live, too. My wife had two family members pass away last year, too. Death visited way too often in 2011. I also saw several close friends who had marriages and relationships fall apart over the past year, which is always a sad event. And to top it all off my doctor informed me just before New Year that I have high cholesterol and he wants me to have a heart scan and I probably need to start watching my diet. Gotta love aging – but hey, it beats the alternative!
So it was an up and down year for lots of reasons, as they all are – but this year the highs seemed just a bit higher and the lows a bit lower. Here’s hoping 2012 is a bit more even keeled, or at least has a few less lows and I don’t have to attend any funerals.
at Thursday, January 05, 2012