Here there be Zombies!

I re-watched Fulci's ZOMBIE last night from the Blue Underground bluray and man that thing looks and sounds great! One of my favorite horror scores - I need to track down a copy of that soundtrack.

This was shot, of course, after Romero's DAWN OF THE DEAD, and is not officially connected to it. However, DAWN OF THE DEAD was released in Italy under the title ZOMBI, so Fulci released his film in Italy as ZOMBI 2 to cash in on Romero's success, thus the unofficial tie-in.

I personally HAVE always thought of it as taking place in the same universe as Romero's films, however.

But this film to me is actually closer to Romero's NIGHT OF THE LIVING DEAD than DAWN. There isn't that comic book sensibility to it that DAWN OF THE DEAD has - the biker gang comes to mind, Savini and company campily loping off zombie heads with machetes, hooting and hollering and having a blast. There is never any humor injected into Fulci's Zombi. It stays deadpan serious throughout, much like Night. The tone is dark throughout the film, and both it and Night end on down notes.

The final shot of zombies slowly marching into New York City made me think - what if this is actually a prequel to Romero's films? In Night it is never explained exactly where the plague came from. What if this is how the plague arrived in America, first infecting NYC then swiftly moving across the states? Interesting to consider...! 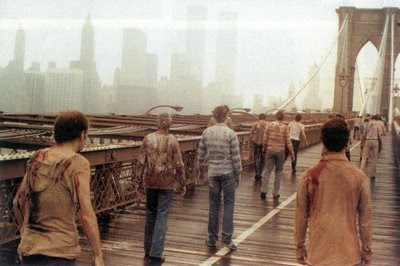