Bela Lugosi's Tales from the Grave #1 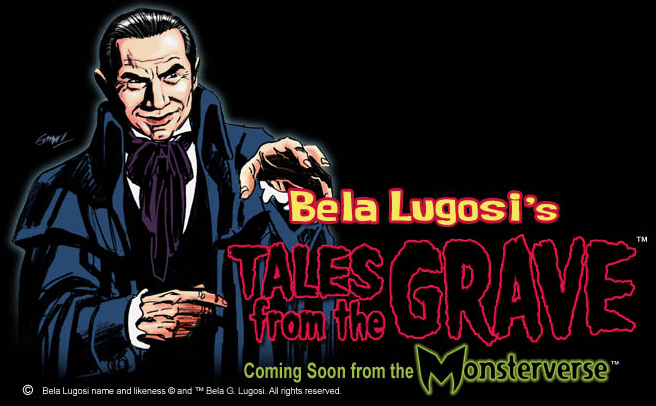 I ran into Kerry Gammill at Wonderfest a few weeks ago and got to talking about the new Bela Lugosi book.  I knew it was a horror anthology and that Bela was the host presenting all new short horror stories, but hadn't had a chance to look at it until then. So after going through it a couple of times I thought I'd review it here on the blog.

Now, in full disclosure I have to admit that I'm friends with several of the creators involved with this comic, which can sometimes make things a bit awkward when reviewing work. But despite that fact I am going to give an honest review.

Priced at $4.99 it is a little pricey, but you get 48 full color pages for that price. Not bad. Two of those pages feature an article by Gary Rhodes called "Lugosi and Dracula: How they Re-Created Each Other" which is really well written and informative and is a nice addition to the comic book content. Kind of makes it a little more magazine-ish, in a way.

There have been other comics with horror actors as the host - Boris Karloff had a series of comic books through Gold Key that ran from the 60s through the 70s called Boris Karloff Tales of Mystery. Karloff appeared on the covers and briefly inside but it was pretty much standard comic fare otherwise. Much like the short story paperback collections he put his name on, Boris really had little to do with the comic otherwise. Since 2008 Blue Water Comics has published Vincent Price Presents, a comic series with Vincent as the host - but I have never actually read an issue of it. Of the big three horror icons - Boris, Bela and Vincent - Bela Lugosi in my mind may be best suited as host of a horror anthology. While I'm fans of all three there is a natural creepiness and coolness to Bela that just sort of sets him apart.

Bela Lugosi's Tales from the Grave is published by Monsterverse Entertainment. It is dated October 2010 but I think it might have actually come out a bit later than that. 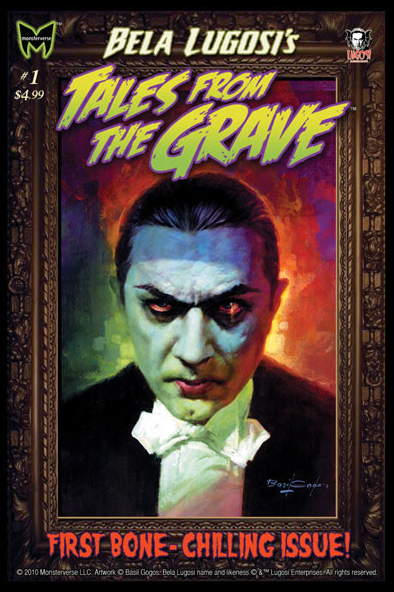 The first issue sports a handsome Basil Gogos painting of Bela. Now, if you want to get a painter for a horror book there is none finer than Basil Gogos. They guys really did it right there and this is a great painting, the original of which is owned by none other than Rob Zombie, who gave Monsterverse permission to use the piece for this issue. Way to go Rob!

The book begins with an introduction page where we meet our central characters - Nosferina, Hugo, and Bela himself. The art for these pages, as well as the first story, is done by Kerry Gammill. Kerry is such a great artist I'd really love to see him draw the entire book. I have been a fan of his since back in his Marvel days, and Kerry definitely has the Mighty Marvel sensibility to his work. Kerry's story is written by Sam Park and is a "Frankenstein-esque" tale called UNPLEASANT SIDE EFFECTS about a scientist working on a chemical to revitalize dead cells. Good story, one of the highlights of the book.

The final story in the book features another terrific one page intro, again drawn by Kerry Gammill. The art for the final story, called THE MIDNIGHT MUSEUM,  is done by Terry Beatty, probably best known in convention circles for the covers he paints for Scary Monsters Magazine. It is written by Martin Powell, and is slightly "House of Waxish" in theme. It stars a villain who looks suspiciously like Bela himself. Another really good tale, both in story and art. They definitely opened and closed the book with their strongest stories.

The rest of the stories in the book vary in quality of both art and story. Most are pretty good and feature Bela in the intro and wrap of the stories. The exception is THE GOOD DOCTOR, by John Cassady - Bela is nowhere to be seen in the story, the characters look like something out of a kids cartoon and the story is a comedy that misses the mark. Out of place with the rest of the book, and it's the only story not in color - although the MARK OF THE ZOMBIE by Rob Brown is sepia colored.

The book is rounded out with illustrations and caricatures of Bela by Frank Dietz, Paul Garner, Kim Loh and Jeff Preston. The Jeff Preston piece in particular is really striking - fully painted, reproduced in Black and White - good stuff. 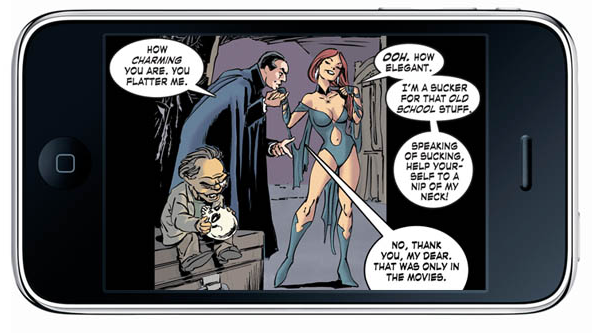 Overall TALES FROM THE GRAVE is a great horror anthology with that classic horror feel. It really treats the memory and likeness of Lugosi with respect and is definitely a book worth picking up. Monsterverse just announced a digital release of the book through iverse as well, so you ipad folks out there can pick it up that way too. Good stuff and I look forward to where they go with issue #2!
at Friday, June 10, 2011