The Greed of Diamond Distributions

The times they are a changing… so wrote Bob Dylan back in 1964, and that saying is as true now as it was then - change is one thing you can always count on. Technological advances have changed the way we do business in every walk of life, and the comic book industry is no exception. Comic books, traditionally a print and paper product, are turning more and more toward a digital art form. Digital comic books - seems a weird concept. Yet that’s the way things are going for a number of reasons. 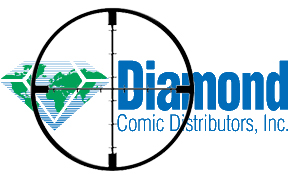 As I’ve mentioned on the blog here before, I got my start in comic books. A fan all my life, it was my early ambition to work in the comic book field. I studied art in college and began doing a little freelance work after graduation, and eventually started my own comic book company, along with my friend Chuck Angell. We self-published a handful of comics, most noteworthy of which is BEST CELLARS #1, which featured the first printed work of a young local artist we met named Eric Powell.
While running this company, originally called OUT OF THE CELLAR COMICS and later changed to VOLUNTEER COMICS, I learned a lot about the comic book industry. Deadlines, workflow, hours at the art table were all things I had anticipated – dealing with Diamond and Capital City, however, wasn’t. Capital City? Yeah, they were a distributor who was Diamond’s direct competitor back in the good old days when there was more than one major comic book distributor. Diamond eventually bought them out – and then there was one.

Capital City was always easier to deal with and had friendlier customer service. Once Diamond became the only game in town this became even worse. I’m speaking from the viewpoint of an Independent publisher with low print runs. Diamond had no minimum print run rule back then, although they preferred you kept it over 1000 and would drop you if you had three consecutive issues with under 1000 issues sold. At least this is my recollection of things, as we’re talking about the early 90’s here.

One thing that killed my enthusiasm for the self-publishing venture was Diamond Distributions. I HATED dealing with them. It was bad enough that comics cost so much to print. Paper costs were always rising and it cost 1000 bucks or more per issue to print. On top of that Diamond would take SIXTY percent of the cost of a comic right off the top. SIXTY percent. Unbelievable! By the time you paid to print a comic and Diamond took their cut of sales you were lucky to break even. For a family man working a 40 hour per week job and trying to make ends meet it was a stressful situation. Look, I understand that Diamond is in business to make money. But the whole model sucks.

I got out of the comic book publishing game and turned my creative energy toward my horror hosting gig, which I’ve been doing happily for 13 years now and counting. Over the years since then Diamond has become increasingly unfriendly toward small publishers, and in fact won’t even carry books under a certain order number, or so I am told. Originally 1000 copies, they later raised this minimum to 1500, a difficult number for many Indy publishers. The little guy is simply unwanted by Diamond, it isn’t worth their time, which is a shame. Rather than work with the Indy publishers they would rather push them out and concentrate on Marvel and DC, as that’s where the money is.

I really think this is a large part in the decline of the industry. You are pushing out the very people who are your life blood. I guarantee I am not the only creator who got out of the business and no longer buys any comics at all. This isn’t because I don’t like them, but more than anything else because I can’t justify paying 3-5 dollars for a COMIC BOOK! Ridiculous. I know I sound like a grumpy old man here but I used to pay 75 cents for comics that were way better than anything Marvel or DC is putting out nowadays. And the costs keep going up because of rising paper, printing and distribution costs.

So now along comes the internet, which I call the great equalizer. And you know what? Publishers now have instant distribution to the entire world without any printing or distribution cost! Amazing. The internet is the new distributor and Diamond is sweating. The writing is on the wall. This is the future of the industry. Ipads, ipods, iphones and other digital devices have really opened up this market.

Diamond is trying to take their monopoly into the digital domain, and if they have their way they would control the distribution of digital comics too. They have partnered with iverse and offer digital comics that are available to customers THAT BUY THEM IN THE COMIC BOOK SHOPS. Huh? You mean I have to actually walk into a shop to buy a code to download a digital comic? Yup. And here’s the kicker – they still make you pay 1.99 for it unless you buy a hard copy too, in which case the additional digital version only costs .99.

This makes no sense. They aren’t distributing ANYTHING across the internet. Let me reiterate. DIAMOND ISN’T DISTRIBUTING ANYTHING ACROSS THE INTERNET. The internet is the distributor here. The creator makes it. Iverse puts it online. Diamond simply adds to the cost by making it available in their catalog. As physical print sales of paper comics declines further and further why bother with Diamond? Go digital and forget them. I’m talking to the Indy publishers out there. Marvel and DC are doing their own thing digitally.

The time is ripe for a smart new company to swoop in and knock Diamond off their exclusive throne. Cut out the middle man - What makes much more sense than Diamond’s backwards-thinking model is simply an online catalog or list of comics available digitally that you can download from your own computer. You shouldn’t have to go into a comic book shop to get a digital comic if you don’t want to, and you shouldn’t have to buy anything else to get the cheaper download. Simply have an online catalog of weekly comics. Maybe charge a small fee to be listed, or a yearly fee, that the publisher pays to be listed in this catalog. Make it searchable, by company, creator, genre and style.

Digital comics should cost no more than .99 per issue. There is no paper cost, and no distributer taking 60% off the top. This makes a far cheaper product still financially viable. ENCOURAGE people to order MORE comics - Maybe offer a discount if they order ten or more digital comics. This could grow the entire industry! And best of all no crappy customer service, shipping costs, misplaced or mis-shipped product.

What Netflix did to the movie industry is about to happen to the comics scene. The old distribution mode is outdated. This really opens up some opportunities for publishers. It is time for Diamond to go away. Leave Diamond twisting in the wind like they have done the Indy publishers over the years. Go digital and use the print on demand printers for the few physical orders you have.
at Thursday, June 09, 2011