here's another piece from the Robert Taylor collection, an original silver name tag that Vincent used while traveling:
Vincent Price first began traveling in 1924 when he went to summer camp in Colorado, and his first world trip--a tour of Europe--took place in 1928/29.  Vinnie continued to travel throughout his life, getting to film locations, making lecture tours, doing theatrical appearances all over America (and in England!).  What better gift to give the constant traveler than this silver luggage tag?  He used it until airport luggage handling began to take a toll on it and then he put it away, a little dented and bent but still able to hold a shine 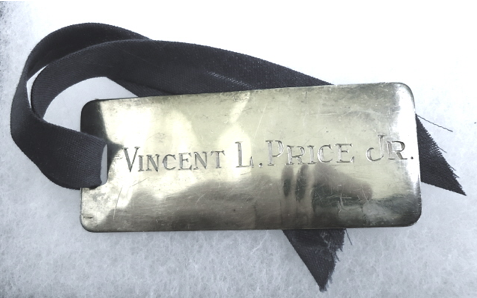