Not to be confused with the 1970 film BLOOD MANIA, or the 1986 film BLOOD MANIAC, HERSCHELL GORDON LEWIS' BLOODMANIA (official title) is a new horror anthology being released in 2015.

It appears there are three or four different directors on this one, but I'm not quite sure - Herschell Gordon Lewis, Kevin Littlefoot, and Melanie Reinboldt, are listed on IMDB and the trailer, although the poster below also lists Benjamin Ross Hayden. The website, however, only lists Herschell Gordon lewis and Kevin Littlefoot. There are supposedly four segments in total, and according to the website HGL co-wrote one segment, and will direct two of them.

I'm a big fan of the portmanteau film genre, so I am always interested in a new horror anthology. This one is being released by Diabolique Films, a division of Diabolique Magazine. It is always great to see HGL back in action though, and love his appearance in the trailer. 86 years young - attaboy Herschell - keep slayin' em! 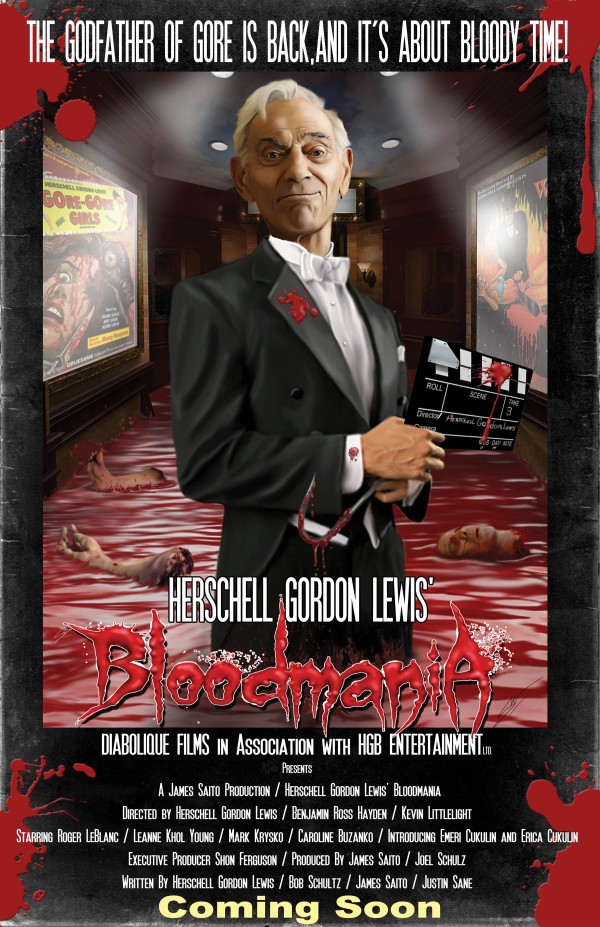 The legendary cult director who brought you such classics as "Blood Feast," The Gruesome Twosome," "Something Weird," "The Wizard Of Gore," "Two Thousand Maniacs!," "She Devils on Wheels" "The Gore Gore Girls," and many others returns to the genre he is officially acknowledged for creating.
BloodMania is a horror anthology comprised of four distinct segments that feature a raucous combination of satirical humor, horror, and enough surprises to satiate the appetites of a broad range of film enthusiasts and horror fans alike. Mr. Dave Trainor, the person in charge of special effects is also the genius responsible for the SFX on the two popular television series "Fargo" and "Hell On Wheels."

Diabolique Films is a division of Diabolique Magazine, the premiere horror genre publication. The production company HGB Entertainment Ltd spearheaded by Mr. James Saito, shot the entire film in Calgary, Alberta Canada with a talented cast and crew largely from that city.

The release of “Herschell Gordon Lewis’s BloodMania” is set for 2015.