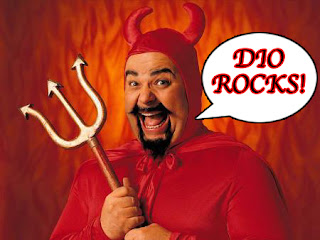 So did you guys hear about this so called church that was planning to picket the Ronnie James Dio funeral? I am not making this up. It's been reported for a few days now, and I struggled whether to even mention it here, as publicity is what these losers are after. I decided to discuss it without mentioning the “church” by name. Not going to give them that satisfaction.

What kind of sick bastards would picket a funeral? The fact they’re so-called “Christians” makes it that much worse. They claim Ronnie James Dio was a Satanist, and evil, therefore their protesting is both warranted and justified. They are the same group of lunatics that protest at funerals of soldiers and homosexuals. These are the type of folks that give religion a bad name.The funeral was yesterday, but I haven't heard any news from it, so I assume there were no incidents.

You know, I watch a lot of horror movies, read horror literature, sing in a horror band and listen almost exclusively to horror rock – but in the end it’s all in fun. I try to live my life the best I can, follow my creative muse, and be good to my fellow man. I know right from wrong and this, my friends, is a clear cut example of wrong. These folks are low life hate slinging publicity seeking assholes. I wish for nothing but the worst for the lot of them in life. Amen.

I just have one last thing to say to those folks. Hope you enjoy being universally hated. You are a joke, a laughing stock, and pathetic. This next video is dedicated to you. Cheers.