Wonderfest and The Gruesome Twosome

Hey guys - I've been a bit more sporadic than usual posting here, as it's been a very busy week, but in a good way. Starting last Thursday my band played at the Muse in Nashvile. That show went GREAT!  Turnout was good for a Thursday night, and all the bands that evening were really good. For out set I wore a werewolf mask and a wig the entire night, despite the heat. I'd been wanting to wear that thing for a while now, and finally broke it out Thursday. Looked pretty cool onstage, i have to say. 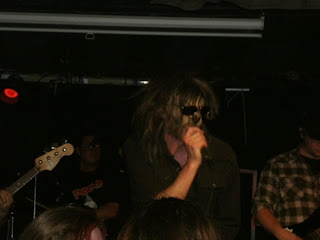 On Saturday my youngest son, Luke, Cameron McCasland and I headed to Wonderfest. The three of us had a fun little roadtrip, and the convention itself went really well. I met new friends, saw lots of old ones, and hosted IT CONQUERED THE WORLD Saturday night before a packed crowd. It went over really well, and during the show we called Bob Burns on speaker phone. That was my favorite part of the night, and lots of other folks favorite part too, according to all the remarks I got afterwards. We all missed Bob being part of the show, so it was nice to have him there in whatever way we could get him!


Monday was back to work and the usual routine for one day, then on Tuesday Luke and I headed out for another roadtrip to Knoxville, TN to see Alice Cooper and Rob Zombie in concert together. They called it the Gruesome Twosome tour, and there was no way I was going to miss that one. We got there about an hour before the doors opened and wandered around a bit. I was amazed at how many t-shirt bootleggers were working the crowd. We eventually made our way inside and to the merch table where I sprung for a t-shirt for Luke at the amazingly low price of $35 dollars! Ouch!

When the show started Alice Cooper played first. I figure they must be alternating who opens from show to show. Alice was, in a word, amazing. He looked great, sounded even better, and put on a totally kick ass show from start to finish. He kicked the show off with three classics: School's Out, No More Mr. Nice Guy, and I'm 18, three songs I thought would be closers. It was a triple punch to the forehead that really got the crowd rockin!

His choice of songs was surprising to me. They only played one song off the new album and a variety of songs from older albums like Goes to Hell and From the Inside. All the shock rock antics were in full swing, including beheadings, hangings, decapitations and more. Alice showed these kids how to rock proppa like, and the show was one big theatrical presentation that was so good I had actual tears in my eyes.

Rob came on afterwards and rocked the house in a barrage of sights and sounds that were a near  sensory overload. Constant non-stop movie images, cartoons, pictures and flashing lights accompanied his techno metal music. It was pretty impressive.  I am a big fan of both artists, and it was a treat to see them together on one bill. Alice was especially impressive, and even better then the last time I saw him perform (The Constrictor Tour in 86).