Well it's a regular monsoon here in Nashville and the surrounding areas. Lots of folks have flooding and weather reports show thumderstorms and a tornado watch for most of the evening for all of Middle Tennessee. I-24 and I-65 interstates are both shut down due to flooding - there are cars floating under water. Insane! SO our Spookhand gig tonight is canceled. I was looking forward to playing it and breaking out our new tunes, but Mother Nature will not be denied. 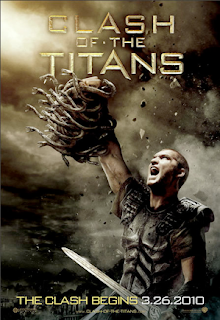 Last night I saw the remake of CLASH OF THE TITANS with my son Luke. I thought it was... uh, well, kinda so-so. CGI was good in parts, nor so good in others. I really didn't care for the character of Hades at all - he was very irritating and used this whispering raspy voice that was not scary, just stupid. They made the Pegasus black for some reason, which just didn't seem right at all. Actually thinking about it, that really bothers me for some reason. I guess they thought a black stallion with wings looked tougher than a white one, but Persues looked so heroic in the old movie on the white horse defying all odds to save the day.

The Kraken was very awesome looking, but did nothing. We had this huge buildup to this awesome beast that was going to appear, and as soon as it did Persues defeated it. Ho hum. Big deal.

I honestly had to fight to stay awake during this movie. I didn't care for the overall look of the film. During battle scenes they used the fast shutter rate effect that is so overused lately, and it's one effect (gimmick) I wish Hollywood would forget about - you can't tell what the hell is going on, it's all too closeup and grainy.

I wish it had not been in 3D, as it really didn't add anything to it. It was honestly kind of annoying and didn't seem like this was intended as a 3D film. I didn't even know I was seeing the 3D version until they handed me the glasses. "Oh, okay" I thought. But after a few minutes I noticed my son had taken his glasses off.

Overall the original kicks ass all over this one. Harryhausen's animation DESTROYS the cgi in this version, especially where the Medusa was concerned. The original seemed so huge and majestic - this one lacks all the grandeur of that film - Skip this one, see the original.

Here is the trailer for the 1981 Clash of the Titans just to wash away the bad taste of this one...

Email ThisBlogThis!Share to TwitterShare to FacebookShare to Pinterest
Labels: 1981, 2010, Clash of the titans, Ray Harryhausen