It Conquered the World - but not DVD 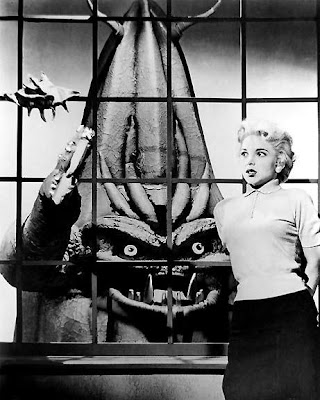 This year at Wonderfest the movie I'll be hosting for our Chiller Theater live show is the Roger Corman classic, IT CONQUERED THE WORLD. In looking for a print of the movie it quickly became apparant that it had never been released on DVD.

I couldn't believe it - but it's true. But thanks to Donnie Waddell the day was saved - he had a dvd-r copy which I am going to trim down to a shortened, streamlined version for the show.

Next year for the Rondo Awards I definitely know what I'm putting down for classic most in need of a DVD release. IT CONQUERED THE WORLD needs a proppa release, and Buelah's not happy about it! It's just a shame that Beverly Garland isn't around to do a commentary track for it any longer.
at Sunday, April 18, 2010