Celebrating Films for the Right Reason...

Howdy all - just want to say right off the bat that I’m not singling out anyone in particular with the following post, simply throwing this out as a little food for thought and speaking my mind…

I’ve been reading posts lately from various bloggers celebrating women in horror cinema. There have been some pretty cool posts raising some interesting points that I never considered before, which is great… If you can make someone think while simultaneously entertaining them, you’ve done your job.

There is, however, a disturbing trend I see from some bloggers that I just don’t get at all. It’s something I first noticed around Rondo Award time and now again with the Golden Cob Awards – and that is urging people to vote for people or projects simply because they are women or are created by women.
Excuse me? You’re really voting for a movie just because the filmmaker is a woman? If so you’re doing an injustice to both that filmmaker and the nominees they’re up against. Unless it’s a category like best actor or actress, gender shouldn’t be a factor. That is just as bad as voting against a movie simply because a woman made it, or voting for a movie simply because a man made it. Makes no sense at all.

The same thing could be said for any particular group, not just women - Black, Asian, male, White, Hispanic – If you’re only watching films or voting for them because one certain type of filmmaker made them, then that is racist and/or sexist.

Don’t bother calling me misogynistic, this isn’t about hating on women. I’m for celebrating PEOPLE who make great movies and turn in awesome performances regardless of gender or ethnicity. I was thrilled to see Kathryn Bigelow whip James Cameron’s ass in the Oscars this year – not because she is a woman, but because her film was better and honestly, I think she’s a better filmmaker than James Cameron. I’d put NEAR DARK and POINT BREAK up against anything Cameron has done. Those movies rock.

This post is about celebrating creative achievements on their artistic merits, not because of the physical makeup of the filmmaker. Its common sense here, folks - a penis or vagina does not make a movie bad or good, and neither does skin color.

Interestingly, chiming in on this very topic recently was none other than Sigourney Weaver. Speaking about why Cameron and AVATAR didn't win Best Picture or Director, "Jim didn't have breasts, and I think that was the reason (he lost)," she told told Folha Online, a Brazilian news site. "He should have taken home that Oscar."

Uh, you know Sigourney, that really sounds like sour grapes to me. This statement wouldn’t have anything to do with the fact that you play a LEADING ROLE in AVATAR, would it? If it were true I'd agree with you, but the honest truth is boobs have nothing to do with Cameron not winning. AVATAR won Oscars for Art Direction, Cinematography, and Visual Effects – in essence all the technical categories, which is where AVATAR shined. AVATAR's story just is not very good - notice it was NOT nominated for screenplay. This was simply a case of the Academy voting for best picture, NOT best boobs. Sorry Sigourney, you are wrong and the Academy got it right. 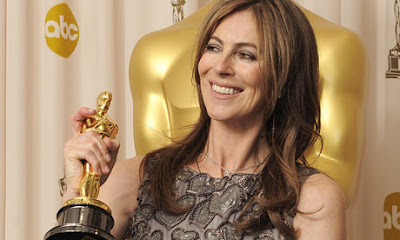 Finally, here is a perfect example of why Kathryn Bigelow rocks...
"I've spent a fair amount of time thinking about what my aptitude is, and I really think it's to explore and push the medium. It's not about breaking gender roles or genre traditions."
- Kathryn Bigelow, 2009

You go Kathryn. Pushing the medium and making the best damn movies you can is what it’s all about.
at Thursday, April 29, 2010