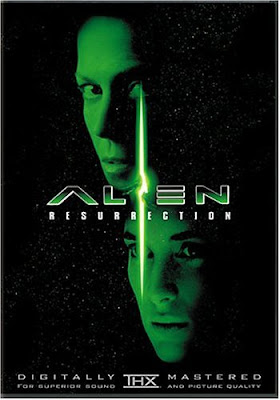 I have avoided watching Alien Resurrection for years – twelve years, to be exact...now I know why. This movie, to quote my 12 year old son, "is terrible."

There are gonna be spoilers in this review – if you've not seen the Alien movies, be warned.

In Alien 3 we discovered Ripley has an alien growing inside her body. She takes the Nestea plunge into a fiery vat just as the alien erupts from her chest. Thus ends the tortured life of Ellen Ripley.

But not so fast – the powers that be apparently thought you couldn't have an Alien movie without Sigourney Weaver, so they concocted an explanation for her inclusion in Alien 4 – cloning. Thank god they didn't use the other obvious answer, time travel. That would have been even more ridiculous than this sequel…but I'm getting ahead of myself.

Alien Resurrection takes place 200 years in the future from Alien 3, onboard a spaceship called the Auriga. On it, a team of scientists have successfully cloned a new Ripley from a blood sample recovered on the prison colony where she became Shake and Bake in the last film. This time around the scientists aren't part of The Company as in previous installments – no, in the past 200 years the Company was bought up by Walmart (no lie) and no longer exists. These scientists are part of the military, and are interested in studying the aliens for weapon research

Enter the first unbelievable plot device, and it's the crux of the entire film. Not only did they clone Ripley, but somehow that drop of blood also contained the DNA of the alien parasite inside her. So when they cloned her they also got the alien as well. You know, I'm no expert on cloning, but I think if someone had a parasite like, say, a tick or a tapeworm, and they were cloned from a sample of their DNA, that parasite wouldn't be included in that clone. But in this film that is exactly what happens. AND not only that, but somehow the DNA from both parasite and host intermingled in the cloning process, resulting in an alien with some human characteristics (more on that later) and a human with alien characteristics.

As a result of this intermingling of DNA Ripley gains a host of new abilities, including lightning reflexes, enhanced strength, advanced fighting abilities, and acid blood to name a few (including shooting basketball like an NBA star). AND best of all, she is able to somehow regain a lifetime of learning within 4 days!! This is another gift from the Xenomorph blood now coursing through her body. 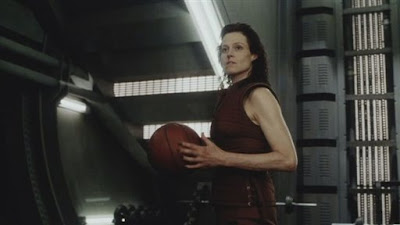 Much like the magic plot device of Batman's utility belt or MacGyver's handyman-itude, cloning is the catch-all for any plot problems in this movie. Why does Ripley have superhuman abilities? Cloning. How can she suddenly learn a lifetime of abilities and processes (from basics like walking, talking, thinking, and processing emotions to regaining full-blown memories of Ripley's former life) within days? Cloning. How does Ripley have an empathic link with the Aliens enabling her to sense where they are, what they are doing, and even smell if someone has a parasitic chest-burster growing inside them? Oh yeah, cloning.

In this film Ripley becomes a cartoon character, a bad comic book superhero with little resemblance to the Dan O'Bannon creation of the original film. Makes me wonder why they even needed her if they just wanted to change her so much. Why not use a less contrived storyline, one that didn't struggle so obviously to find a hokey method of resurrecting Ripley. There are a whole host of ways you could include her and still be true to her character - have the characters watch recorded messages of Ripley from the past, or listen to ship's logs, or use flashbacks – hell, a creative script writer could have come up with tons of great ideas. But. alas, that was not to be.

As we learned in Alien 3 (a whole other set of problems there), the alien inside Ripley wasn't just any alien – it was a queen alien. So the scientists on the Auriga have themselves a queen that they keep trapped in an isolation chamber for study. It quickly grows to giant size and begins laying eggs.

This is where the plot gets confusing time-wise. Ripley’s parasite was removed and she regained her memories and full capacities within 4 days. But by that time the queen is fully grown as well, plus there are also other fully grown aliens running around too. Thirteen of them, we later learn. 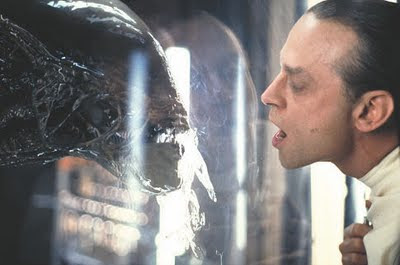 From here I can just imagine the script writer's next thoughts - Okay, so we've resurrected Ripley – brought the aliens onboard - what next? Oh yeah, a cyborg. That was cool in the first two movies. We need to have that. Except this time the twist will be it'll be a woman cyborg – cool!

This time around the cyborg is played by Wynona Ryder (whose character is named Call). She lands onto the Auriga with a crew of mercenaries onboard a space ship named The Betty. They are delivering cargo (humans, actually, who are in cryosleep). Turns out these folks are to be human hosts for the eggs the queen has laid. It isn't clear whether these humans are the same ones that become a meat-house for what ultimately grows into the 13 rampant aliens previously mentioned, or are in addition to those, but it doesn't matter – The aliens are onboard and replicating, that's all that is important. Here there be aliens.

Okay, from here you can probably guess what happens – the aliens escape, start killing humans, and it's up to the mercenaries and Ripley to defeat the aliens.

The twist is that the Mother alien, as I mentioned before, has gained new abilities from Ripley too, and she not only lays eggs but actually gives birth to an alien/human hybrid through a human-type womb.

What I love about this scene is how they add a commentary to keep the viewer up to date on just what the heck is happening. There is a conscious human, one of the lead scientists on the ship, in some sort of cocoon along the wall, very similar to what we see at the end of the first movie. There are several other humans in cocoons spread about there as well.

This lead scientist for some reason has taken on a sort of symbiosis with the mother – unlike similarly cocooned humans in previous movies who screamed in terror, this dude is really, really into it. He is in tune with the queen alien and keeps prattling on about how beautiful everything is, and gives a nice convenient running commentary explaining what's happening. Honestly it is a good thing he is there, because otherwise the audience would have no fucking clue what is happening. Basic storytelling 101 says show, don't tell – but when you have a turd of a script like this, you have to tell.

Well, the baby tears its way out of a skin sack, which is connected to mama's belly. Her offspring turns out to be a pink, fleshy alien with somewhat human facial characteristics. It is unintentionally hilarious looking, and when this thing appeared onscreen my son laughed out loud. It spots Ripley, who has conveniently fallen into the pit with the mamma alien just as it gives birth to this hybrid, and turns toward her. It advances and stops inches from her face (now where have I seen this scene before?). It then begins to rub its face over hers, licking and caressing her. 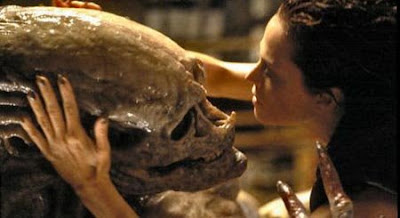 We are told by our boy in the cocoon that the baby has now accepted Ripley as its mother. Still dripping with embryonic ooze, this baby then turns on mamma alien and kills it. The queen was a badass in Aliens, but in this film the newborn baby easily and quickly dispatches her.

Ripley runs away and she and the surviving mercenaries board the Betty and launch into space, away from the larger ship, which is on a collision course with a desolate part of Earth. But, and I know you'll find this to be a surprise, guess what? The alien baby snuck onboard and there is a fight to the finish between it and Ripley and the android, Call (again, where have I seen this scene before?).

In what I have to admit is the single coolest scene in the entire movie, the alien is defeated by being sucked through a hole in the ship's window. It is ripped into shreds of meat and ejected into space in pieces. The ship conveniently gains Earth's atmosphere just in time to save Ripley and Call from a similar fate, and we see the larger military vessel, the Auriga, crash into Earth and explode. The Betty lands on Earth and we see it is a wasteland, in complete ruins. Earth has been destroyed and apparently abandoned.

I have to admit I am a fan of the Alien franchise. The first film was a masterpiece, blending science fiction and horror and creating one of the scariest movie monsters ever. The second is more of an action film, true, but it still maintains the spirit of the original and expands the storyline in an interesting direction. The third has problems – the biggest of which is the arbitrary extermination of Hicks and Newt (who survived in Aliens). An early draft of this script called for Hicks to be the main character, with Ripley as a support character, (plans were for her to return in the 4th installment as the lead character). What a great movie that could have been. Despite its flaws Alien 3 still has one consistent element – Ripley. She is still the same Ripley, right to the end where she sacrifices herself to destroy the alien inside her.

This 4th installment pisses all over the previous alien films. There are silly plot points, (such as the mercenary who, hands up at gun point, ricochets a bullet off a ceiling - bouncing twice, no less - to hit his captor in the head and escape), that would be more at home in a B-western. Cliché one liners from Ripley ("Who do I have to fuck to get off this boat?" or "There's a monster in you, and I'm its mother" or in answer to "I thought you were dead" – "I get that a lot") that sound like they're straight from a corny Schwarzenegger action flick.

Not only did the filmmakers wreck Ripley's character (insisting on including her yet changing her – what's the point?), dismantle The Company (the real villain behind all three previous Alien movies), and reinvent the aliens (which were the coolest movie monster ever and didn't need reinventing), they also did away with the entire population of Earth.

Writer Joss Whedon is the creator of Buffy the Vampire Slayer – which pretty much explains a lot of the cartoon silliness that, while it worked perfectly in that series, has no place in an Alien movie. Director Jean-Pierre Jeunet is a Frenchman, which explains why the ruins of the Eiffel Tower are seen among the ruins of the city in the final shot. Looks like Jean-Paul was paving the way for a possible future sequel with super-hero Ripley and her cyborg sidekick Call in a post-apocalyptic France. That might make for an interesting movie, but it doesn't have any place in the Alien franchise. I hope that movie never gets made. Far as I am concerned, Ripley died in Alien 3 and that is the end of her character.

In retrospect, perhaps time travel would be better than this cartoon monster flick.
at Friday, April 23, 2010