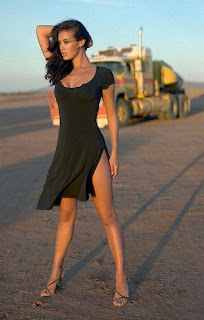 Since I wrote about this a couple of days ago I thought I'd follow up here - Ain't it Cool News reports the new Wonder Woman will be an Australian Supermodel named Megan Gale.

Looking at her listing on IMDB.com, she only has two films under her belt to date, one of which was a 2005 film called Stealth. She only plays a bit part in it, apparently, but the film stars, interestingly enough, Jessice Biel, who reports now say passed on the role.

Don't know if her acting is up to the task, but she certainly looks like an Amazon warrior princess to me!
at Sunday, December 02, 2007