Tales from the Crypt/Vault of Horror

With Christmas just around the corner (13 days and counting) I thought I'd mention one of the dvds I'm most looking forward to in my stocking. Fox/MGM's Midnite Movie double Feature, TALES FROM THE CRYPT and VAULT OF HORROR 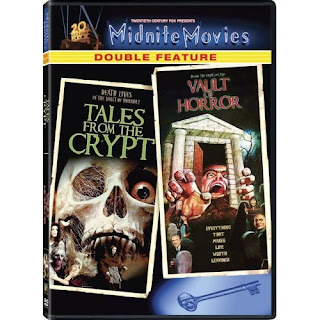 TALES FROM THE CRYPT was made in 1972 and is on my list of favorite horror movies. I've always said it's one of the movies I'd most like to host. It is the first big screen adaptation of the EC comic Tales from the Crypt, of which I'm a huge fan, and is a real treat to watch. It's an anthology film, from Amicus studios, and features five stories plus a wrap-around segment. All of the stories are excellent, in particular the Peter Cushing story, "Poetic Justice", and the final story, "Blind alleys", staring Nigel Patrick, in which a mistreated group of elderly blind patients exact revenge on their cruel headmaster in true EC fashion.

VAULT OF HORROR is the follow-up to TALES FROM THE CRYPT, made a year later. It is still fun, once again following in the anthology format, but not nearly as strong of a film as it's predecessor. The best story is "Midnight Mess", which is adapted from the "Tales from the Crypt" comic story in issue #35 (written by Al Feldstein and art by Joe Orlando). It concerns a brother tracking down his sister to a small town. He kills her for her inheritance money, and afterwards stops in a quiet restaurant for a late night snack. The main course, however, isn't exactly what he expected…

This story in particular is one of the more disappointing things about this dvd, from reviews I've read. Fox included the edited version of this film, where they use a freeze frame of the gore moment in the climax of this story. I understand this is the "PG" edited version, not the uncut original. Disappointing. The print of "Tales from the Crypt, however, is supposed to be pristine. This alone makes it a good buy for me, as I only have "Tales" on VHS currently - hopefully a complete version of "Vault' will be released on dvd at some point in the near future.

Regardless of the edited print used for VAULT OF HORROR, I still look forward to adding this one to my collection. One neat bit of trivia to look for when you watch these - there was a novelized version of TALES FROM THE CRYPT written, and as an in-joke it appears in VAULT OF HORROR. You can see a character (Micheal Craig) read it in the 4th story, "Bargain in Death."
at Wednesday, December 12, 2007