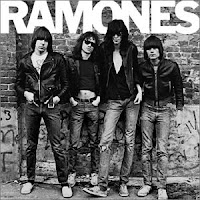 Has there ever been a better debut album than the Ramones first release. THE RAMONES? If so, I don't know it. re-listening to this the other day, I was struck with how terrific all the songs are on it. Released in 1976, the songs sound as fresh and energetic 31 years later. Just a fantastic CD, and with Christmas coming up in 6DAYS! it would make a great present - for those of you who have someone you haven't shopped for yet, HEY HO, GO get em' some Ramones.
Here's the tracks on the original release:

"Blitzkrieg Bop"
"Beat on the Brat"
"Judy Is a Punk"
"I Wanna Be Your Boyfriend"
"Chainsaw"
"Now I Wanna Sniff Some Glue"
"I Don't Wanna Go Down to the Basement"
"Loudmouth"
"Havana Affair"
"Listen to My Heart"
"53rd & 3rd"
"Let's Dance"
"I Don't Wanna Walk Around With You"
"Today Your Love, Tomorrow the World"