A Season of Agony

I grew up a Miami Dolphins football fan. I can't tell you exactly why I picked them as my favorite, (other than maybe because their games were on TV in our area more often than other teams), but for some reason I chose the aqua and orange. My brother chose Dallas as his favorite team. My dad was a Washington Redskins fan. My mom really didn't have a preference, but she leaned toward the Oilers because she liked their coach, Bum Phillips. I kind of preferred it this way - it seemed more individual, more personal. They were MY team. I chose them, despite who the rest of my family liked.

As a kid your favorite team becomes more than just a casual interest - it infuses into your personality and become a part of who you are. I had an entire wardrobe of Miami Dolphins jerseys and clothing, which I wore proudly.

I remember the year I first had to get glasses. More and more trouble reading the chalkboard led to a trip to the eye doctor and then the inevitable... glasses. I was devastated - I HATED it! 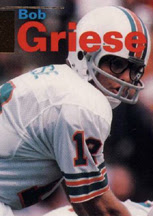 But that same year Bob Griese, quarterback for the Miami Dolphins, got glasses too, even wearing them under his helmet during games. Wow! If the quarterback of my favorite football team could wear them then I guess it must be okay. I just became that much more of a fan.

I was friends with an employee at the local library named Kevin who just so happened to be a huge Miami Dolphins fan. Kevin helped me look up Bob Griese's address in a big directory of some sort that they had there at the library, and I mailed him a letter. Months later, after I had forgotten all about it, I received an autographed postcard back. Too cool!

My junior high school days were not the greatest. It was a tough time. I was going through an awkward, nerdy phase - all tall and gangly, uncoordinated, and a bit shy. Needless to say I was not the most popular kid. I didn't have a lot of friends, preferring books and comics to actual people, in most cases. To make matters worse my school wasn't the best, in fact it was terrible. It is tough being a smart kid in a public school. Kids are merciless, and anything they perceive as different is immediately a target of ridicule. 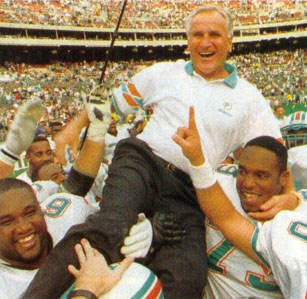 But no matter how bad things got, one of the constants I could rely on was the Miami Dolphins. They were a proud franchise - they posted the only undefeated season in 1972, culminating in one of their back to back Superbowl wins. They always had a winning record and were in the playoffs. In the 80s came the Marino years, guiding the dolphins all the way to the Superbowl in his first season. They had the winningest coach of all time, Don Shula. Marino set every passing record there was. The Dolphins were riding a wave of good fortune.

I had, truth be told, moved on to college by this point and was much more concerned with grades, girls and parties than football, but I still followed them somewhat and kept up with what the team was doing when I could.

But the dark days started in 1993. The team was sold to new owner Wayne Huizinga. The original owner, Joe Robbie, passed away and his family sold the team to Huizinga in 1993 (Huizinga actually purchased a 50% share in 1990, and bought the rest in 1993). The first thing he did was pull the Joe Robbie name off the stadium, selling the naming rights to an underwear line - the Dolphins home stadium was then known as Pro Player Stadium. From there, it all went downhill. Here's a few low lights:

1995 - Don Shula retires. Shula said that he "agreed to step aside", leading to speculation that Huizenga fired him. Jimmy Johnson, former head coach of Dallas (the man who replaced legendary coach Tom Landry), is named as head coach. Jimmy would, in 1999, draft convicted felon Cecil Collins with the first pick of the 5th round, who would again break the law in December of that year and is currently serving time in prison.
1999 - Team suffers the worst playoff loss in NFL history to the Jacksonville Jaguars, 62-7. After the season Jimmy Johnson and Dan Marino both retire.

2000 - Dave Wannstedt named head coach, despite a paltry 41-57 record as head coach of the Bears.
2002 - Wannstedt gives 2 first round draft picks for running back Ricky Williams, one of the worst personnel moves in team history.
2004 - Ricky Williams "retires" from football after testing positive for Marijuana for a third time. The team starts the season 1-8, and holds the NFL worst record at the time - Wannstedt resigns as Dolphins head coach mid-season (November 9, 2004) and is replaced by interim coach Jim Bates. The team finishes 4-12.

2005 - The Dolphins hire LSU head coach Nick Saban to lead the team, despite many player's desire to keep Jim Bates as coach.
2007 - Jan. 3, 2007 - Nick Saban resigns and becomes head coach of the University of Alabama. In the previous weeks leading to the cowardly January 3rd announcement, Nick had vehemently denied that he was going to accept the Alabama job.

The Dolphins most recently named Cam Cameron as head coach, the offensive coordinator of the San Diego Chargers. Cam has NO experience as an NFL head coach, and his only previous experience as head coach was at Indiana University where he posted a stellar 18-37 record.
Here is one damning statistic. Of the 58 players drafted or acquired using their draft picks between the years 1998-2003, not one is on the Dolphins' 53-man roster today. That is a 6-year span of wasted draft and trade picks.

As of today, the Miami Dolphins are 0-13. It is a franchise low - worse than even their inaugural season. They are the laughing stock of the NFL. Under Cameron's regime they have traded away star players (Wes Welker and Chris Chambers), suffered a rash of injuries, and are down to third and forth string players in many cases. The play calling has been atrocious. Bad decision after bad decision. Things stink down south. There is something wrong with this team. They are bad across the board.
To make matters worse, the New England Patriots are 13-0, threatening to break the Dolphins solitary undefeated season record.
Consolation prize - the Dolphins will get the number one draft pick next year. They suck so bad the NFL will award them the first pick in the draft. Hooray.

It's been a tough year for Dolphins fans. They look a sure bet to be the first team in history to go 0-16. That's Karma for you. After years of gloating over the perfect season and celebrating when the last undefeated team loses it's come back to bite them in the rear. A double whammy of the Dolphins going 0-16 and the division rival Patriots going 16-0 is enough to make Dolphins fans want to puke. I know I do.
But times are different now. I no longer live and die with the Dolphins on Sundays - heck, I only rarely get to see their games. We have our own professional football franchise in Nashville now, the Tennessee Titans, something I only dreamed of as a kid. I no longer get overly up or down with wins and losses, it just doesn't seem that important any more. But I do still follow the team, and it is a shame to see a proud franchise like the Dolphins in such a state of disarray.