Interesting night last night! We were asked to play this gig by my friend Blake whose band, Armament, actually broke up. He asked if we could do him a favor and fill in for this emergency show. I said cool, we’ll do it.

In the meantime one of the employees of The Muse booked several bands, too. So I get there to find out there are actually 6 bands playing that night! 6 Bands! On a Wednesday in Music City! Music city – Ha! Let me tell you something about “Music City” – they are a fickle bunch. They won’t come out on a weeknight, generally, and many times that holds true for weekends, too. I think it’s because there are so many musicians in one town. Nashville is in that weird phase between big and small cities. We’re big enough to be considered a major city, yet we’re still a small town deep down at heart. In other words Nashville as a whole is still figuring out who they are and that trickles down to the music scene, meaning sometimes you get good crowds, other times not.
At any rate, we were playing a show that had absolutely no advertising, so I was glad to see anyone there at all. The general age of the crowd ranged from 15-17 years old, I’d guess. Very young crowd. The first band went on at 8:15 or so. The first singer was an acoustic act, one guy with a guitar doing Indy rock. Definitely not my scene. The second act was a pop punk band, not too bad. Third band was a Green Day influenced trio who were the best of the opening local bands. They were pretty good, except for the Brittany Spears cover – yeah, that’s right, Brittany Spears. Not sure what that was about ! 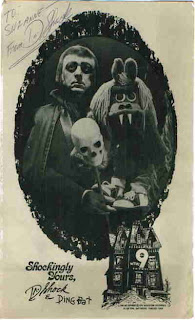 Between the next set I struck up a conversation outside with a guy named Tim who was closer to my age – actually a bit older. He was the father of the drummer for the band that had just played (I apologize I didn’t get the names of any of the bands playing with us). Talk about a small world – turns out he used to run camera for a horror hosted show in Chattanooga, TN called Shock Theater. It ran in the early 70’s and was hosted by Dr. Shock, played by actor Tommy Reynolds. How cool is that!? Here we play this weird Wed. night fill-in show and I somehow end up in a conversation in the parking lot outside and meet a guy who ran camera for a horror host in Chattanooga in the 70s? What’re the odds?
I totally missed the band that was onstage at this time. Not sure who they were or even what type music they played, all I know is they were from out of town. We were up next. Considering the age of the crowd and their general temperament I decided to forego any costuming. Plus it was about 80 degrees inside the place, so I stayed in t-shirt and jeans. Definitely a low-key night costume wise.
When we went onstage there were maybe 20 people in the room. Small crowd but what the hell, we gave it our all. I honestly expected to clear the room by the third song, considering our stuff is a quite a bit harder than the other bands, but they not only stuck around they actually dug it. By the end of the set we had won the crowd over – they started a mosh pit and when we finished they chanted “One more song, one more song.” Sweet, an encore! So we finished with a sloppy version of The Misfits” 138.”
All in all a good night - Just goes to show you never know!
at Thursday, July 22, 2010