I was doing some research today and writing some scripts for upcoming episodes of my program, Creature Feature. One of the episodes we're showing is the 1963 movie The Sadist, starring Arch Hall Jr. as a homicidal maniac named Charlie Tibbs who tortures an innocent group of motorists whose car breaks down.

I had this movie playing in the background while I was working, and it struck me just how far ahead of it's time this movie was. It is a really brutal movie for its time. Heck, it is still a brutal movie, so much so I had second thoughts about showing it at 1pm. It is a precursor to such movies as Texas Chainsaw Massacre, particularly in the graphic violence portrayed in it, the most shocking of which is a close up execution by pistol shot to the head of a man kneeling in front of Charlie. 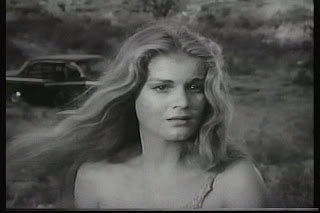 I was also struck by another thought - this could in fact be the very first movie to feature a "final girl." If it isn't the first it is easily an early pioneer of this genre. Helen Hovey is the actress who plays our final girl Doris Page in The Sadist. This was the only film Helen ever made. She was Arch Hall Jr.'s cousin, her mother being Arch Hall Sr.'s sister. This makes the scene where Charlie oogles and near molests her extra creepy.

The scene where she is running down the dirt road fleeing the scene of terror in particular reminded me of Chainsaw. I put together a back to back comparison of a final girl flee scene from each...


Arch Hall Jr. doesn't get much respect as an actor, and probably rightly so as his films are far from Oscar worthy. However, The Sadist is a movie that just might have been more influential than folks give it credit for. It is a really well made movie and this is easily Arch Hall's best acting job. Well worth a look if you've never seen it.
at Sunday, July 25, 2010