Interview with Jimmy Psycho of Psychocharger 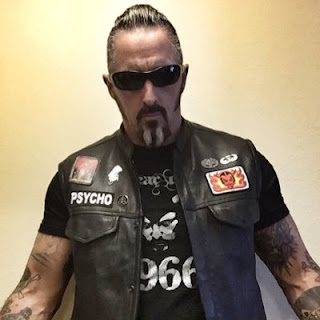 Greetings fright fans,
This week I’m talking with a guest who visits all the way from New York City. He’s the lead singer and guitarist for the Psychobilly band Psychocharger. He’s been rockin’ and shockin’ for several years now and keeping that horror flag flying high in the rotten big apple. It’s my pleasure to welcome into the rock and roll laboratory this week, Jimmy Psycho.

Hi Jimmy, welcome to the lab. Hope you didn’t have too much trouble finding your way here. Just brush aside the cobwebs - I probably should clean them but they sort of make the place a bit cozier, don’t you think?
Jimmy - Nah! your place is fine as it is!  Where’s Nurse Moan-eek?!?! Hubba-Hubba!!!

Dr. G - So let’s talk about the origins of Psychocharger. You were originally called the Psychonauts, if I’m not mistaken. When did the band form, and what prompted the name change?

Jimmy - I was living down on Miami Beach at the time, and I had an idea to start a “horror influenced-industrial-psychobilly-surf” band…and no one was into the idea.  It’s hard to imagine that now with all
the “-billy” bands that are out there these days, but back then, most people were trying to be the second coming of Pearl Jam!  So, I set up a home-studio and started recording some tunes. I then started sending the songs out to radio stations and venues, and got a lot of requests to play out, so I booked a shitload of shows, and I didn’t even have a band together! Those early shows were pretty rough, I still didn’t have a consistent line-up for a band, I was pretty much just using random people, and I didn’t know exactly who would (or would not) show up to actually play the gig. A lot of times it was just me and someone running the samples and backing tracks!
I relocated to New York City, and immediately brought in “The Diabolical Dr. K” on bass, who I have known since high school.  We got through a drummer about every two years…right now, we have DW Friend playing drums with us, and we also have our long-time friend Greg Jaw fill in on bass/second guitar on occasion. Originally, the band was called "The Psychonauts".  However, due to a pending legal action by a group of London-based DJs using the same name (who did nothing but shitty remixes of Oasis songs), the band changed the name to "Psycho Charger" in 2001.

Dr. G - I know you’re a die-hard monster kid. Did your parents let you watch a lot of horror movies growing up or did you catch the horror bug later in life?

Jimmy - Oh yeah...I was watching horror movies ever since I can remember.  I grew up in Ohio, and we had a lot of television horror hosts that would always show them. I tried to catch them whenever I could.

Dr. G - What are some of your favorite horror movies?
Jimmy - We get asked this question a lot... I like movies that combine humor and horror...I think the gold-standard of that kind of film is “Abbot and Costello Meet Frankenstein”. Great movie.  More recent films that have really done that really well are Return of the Living Dead, Shaun of the Dead, and Bubba Ho-Tep.  I revisit those often!
But really, if I had to single out just one movie, it would have to be the film “Blacula” starring William Marshall as the Prince of Darkness. This movie has it all… it’s a vampire/horror flick with elements of
comedy and blaxploitation all-wrapped up in the vibe of a 1970’s crime-drama television show. That’s a lot of bang for your buck!!! I loved this movie ever since I was a kid…there’s a slow-motion scene of
this vampire patient running down a hospital hallway that terrified me until my early teens…
Dr. G - Psychocharger has a very distinctive sound – a three piece band playing guitar driven Psychobilly with industrial overtones. What would you say were some of your musical influences?
Jimmy - That’s really easy…it all started with Elvis, Baby…I know that sounds like a “safe” answer, but damn-hell it’s the truth! I heard those early Sun-era 45s and thought I was gonna lose my mind! Elvis had a PROFOUND impact on me…I knew that there was a party going on somewhere out there and I was gonna get in on it!!!
Dr. G - Your songs are filled with references to classic horror movies and monsters (My personal favorite Psychocharger song is Blacula). I’m guessing you write most of the lyrics?

Jimmy - Yeah, I’m the one.  I write most of the lyrics while riding the NYC Subways...a lot of true-horror inspiration down there!
Dr. G - Are the other band members big horror fans too?
Jimmy - Yes, they are, but Gregjaw is into horror comics and DW is into horror art.  So, we all have a common interest in horror, but it’s in different areas.
Dr. G - You appeared in the horror host documentary American Scary talking about your childhood horror host. Who was that, and did they have a big influence on you and your love of horror movies?
Jimmy - I grew up watching Dr. Creep out of Dayton, OH.  He had a show called “Shock Theater”.  He really made watching the movies a real special experience and I rarely missed it.
I finally got to meet him a few  years ago while I was visiting my family in Ohio...he was appearing at a Halloween Parade.  Since I flew in, I didn’t have a car, so I made my Mom drive me to go see him!!!  He was really cool, really appreciative of everyone who stopped by to see him.
Dr. G - The interviews in American Scary were shot at the Horror Hootenanny (an annual horror rock extravaganza held in Nashville, TN and hosted by yours gruely). Psychocharger has appeared several times at the Hootenanny, and always put on an awesome show. Your stage garb has varied wildly, from leather and gas masks to just your tighty whities. Talk about your stage show and prop/costumes if you would.
Jimmy - Thanks, glad you enjoyed the shows that we’ve done there, and we ALWAYS look forward to coming back, the Hootenanny is an AWESOME event, and it’s always one of the highlights of our touring year.
Not to sound all “heady” but, we view the stage show as an extension of the creative process of the band...we are proud of the fact that, for better or worse, we have never played a “straight” show.  We change up our stage show pretty often…so, we try to keep people guessing as what we’ll do onstage…will it involve blood? Raw Meat? Several boxes of Count Chockula cereal? No one knows, and we never tell before we play…it’s all about the reveal!
At the core of it, they can ultimately expect a band of psychos that will be playing every single show like it’s the last show they will ever play, that is.…ALL BETS ARE OFF, AND ANYTHING GOES, BEEOTCHES!!! 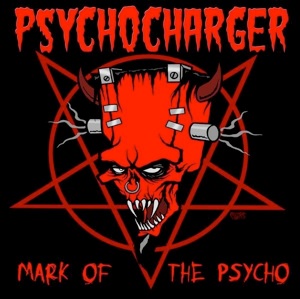 Dr. G - So tell me about the new Psychocharger CD.
Jimmy - Oh man, I could go on and on about the new CD...The new CD is called “Mark of the Psycho”...15 tracks of the best stuff we have ever written and recorded.  I think it sounds a bit louder and heavier than our previous stuff, but it’s still rooted in where we came from.  There’s a lot of great special guests on it...DJ Bonebrake from the legendary punk band X plays drums on a song, Nashville Madman Jeano Roid from the Creeping Cruds does some blistering guitar solos, Unkle Pigors of Toxic Toons, not only does the artwork for the CD, but he wrote lyrics and appears on a song.  Oh yeah, and there’s this guy named Dr. Gangrene that shows up on there as well...Can you dig it?!?!

Dr. G - Yeah, that guy’s a freak! Will you be touring in support of the new CD?
Jimmy - Oh yeah. We’re always out playing...

Dr. G - You put together a music video for one of the songs in a most unique fashion - using a variety of TV horror hosts. Tell my readers how that came about and where they can see it.

Jimmy - We are HUGE fans of TV Horror Hosts.  You guys and gals are really doing something special, and your dedication to the craft is most impressive!   The video is for a song off the new CD called “Blood!!! Shock!!! Kill!!! Rock!!!” and it’s a song that consists of nothing but horror movie titles.  We were inspired by the video that Bob Dylan did back in the day for his song “Subterranean Homesick Blues” where it’s him flipping poster boards with the song lyrics as they appear.  We thought we would be able to coordinate a bunch of Horror Hosts from all over to do the same kind of thing.  The video that came in was really, really great.  Everyone really put a lot of effort into doing a great job and it shows...in fact, all the video we received was so good, it became hard for us to select which takes to edit out...a lot of tough choices.  The video should be done soon...when it’s completed, we’ll be sending it out to the participating Horror Hosts to show...

Dr. G - In that video you guys are standing in a snow covered field rockin’ out in just your tighty whities, covered in blood. Pretty crazy looking and I’ll just say you’re a braver man than me Jimmy.

Jimmy - HAHAHA...yeah, that was one of those things that was a great idea until it was time to do it!  It was thirty degrees that day and it had just snowed all the previous day.  We were out in the woods wearing nothing but our tighty whities, covered in blood...the blood actually started to freeze on us!!!

Dr. G - Well thanks again for spending some time with me, Jimmy. Hope to see you again at this year’s Horror Hootenanny in Nashville on September 25th. There is a spot reserved for you if you ghouls can make it down.

Jimmy - Thanks again, always a pleasure chatting with you...the Psycho Charger-Nashville connection is super-strong...we’ll be back down sometime soon!!!

Email ThisBlogThis!Share to TwitterShare to FacebookShare to Pinterest
Labels: Jimmy psycho, Mark of the Psycho, Psychocharger