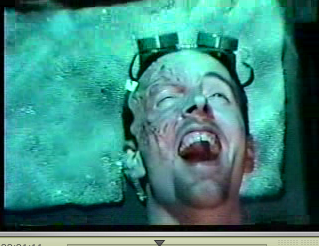 Today is the anniversary of the very first broadcast of my TV show, on July 1, 1999. My how time flies. Since then I have changed format, rotated cast and crew members, and moved the show to regular broadcast TV. We're now a 2 hr program - it was just a half-hour one when we started. The show is now called Creature Feature - the half-hour program was called Chiller Cinema. It ha been a fun ride and the next phase of it begins in a couple of weeks when we go back to a weekly broadcast. Thanks to everyone who has watched and supported and helped make this program a success.

Here is the original open for my show and a brief part of the pilot episode. I didn't have any theme music when I began, so I went to a neighbor's house and played a moody tune on his keyboard. Worked well for a while... the house is an old abandone house in Hendersonville. It is no longer standing - it finally collapsed in a storm. I always thought it was cool and eerie looking, so when we began the show I called the realtor for the property it was on (which was for sale) and asked if I could use it for the show. He said fine... we had to scale a fence to get to the house. The close-up portion of this is actually my Grandmother's basement. I always  used to get creeped out down there and loved it! I remember going down there with the lights off and seeing how far i could walk into it before I got freaked and ran out. Then I'd go back and try again when my courage got up!!

Funny stuff there. You'll notice the scars on my face. Yeah, that lasted for a while until I got tired of using spirit gum all the damn time. I wrote them out in a later episode. When I call for Oogsley in this bit, my assistant, that is me doing his voice. I didn't have any editing facilities at the time, and was doing all my cuts with two VCRs. Any effects I used were real time - so my director and camera guy, Chuck Angell, just hit play on a tape recorder to play a pre-recorded bit.

Man, seems a hundred years ago. Funny to go back and look at the early stuff. Let me know if you guys want to see more of this. I have every episode saved, on either VHS-C, SVHS, Mini-DV or DVD. I can post some segments from time to time if there is demand for it.
at Thursday, July 01, 2010