My God, its almost dark. They'll wake up soon.

I have to admit I'm feeling a bit guilty. I broke down and joined Netflix. After writing my previous post lamenting the fall of the mom and pop video shops I feel like a bit of a hypocrite, but we tried a one month free trial of Netflix and I'm hooked. Streaming movies through our Wii is simply amazing -instant access to an entire library of films and TV shows blows my mind. No wonder video stores are becoming obsolete. They can't compete with all the movies you could want for ten dollars a month right on your television screen, no late fees to ever pay. But that's the future of videos and dvds... hell, buying dvds will probably become a thing of the past. Why bother spending money when you can just call it up on your Netflix cue at a moment's notice? 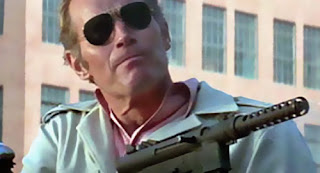 I re-watched THE OMEGA MAN today, starring Charleton Heston. Man I really appreciate this movie. It's all about Chuck - he is the swaggering superhero, the tough guy struggling against all odds to survive in a world gone mad. Heston was in his prime here and it's a joy to watch him work. This film is a real reflection of the times - eight track tapes, vinyl records, seventies fashion and hip slang. It's a fun film and even the variations from the original Richard Matheson book work here.

So here's to Netflix and technology... and whatever advances the future holds!
at Saturday, July 24, 2010

Email ThisBlogThis!Share to TwitterShare to FacebookShare to Pinterest
Labels: i am legend, netflix, The last man on earth, the omea man