My thoughts on Survival of the Dead… 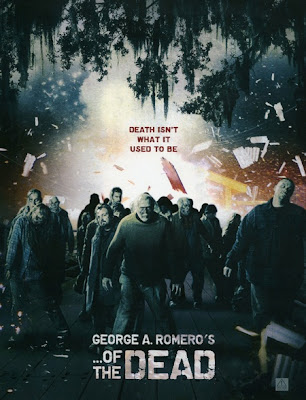 I finally got a chance to see SURVIVAL OF THE DEAD late last week, and I decided to let it sink in a bit before writing about it. I had been looking forward to a new Romero zombie movie since the project was first announced. I’m a fan of Romero’s work and the first three movies in his “Dead” series are a really interesting trilogy of films.

Survival of the Dead, unfortunately, really struck me as kind of hollow. It kind of took a few days for me to be able to put my finger on just exactly what bothered me about it.
It wasn’t the plot that bothered me. Although this isn’t the story I had hoped to see, I was ok with it. Romero created this universe, and this threat, so I will go along with him on this point.
*Spoiler alert *
To recap, a group of soldiers make their way to an island and find themselves smack in the middle of a feud between two families who live on the island. This feud has been going on for years, and the zombie plague has served to intensify the rivalry. One family wants to exterminate the walking dead, the other side to capture and hold them in case a cure comes about. They hope to train them to feed on something besides human flesh.
*End of Spoiler alert *
Many of the special effects in this movie were done digitally, primarily the blood spray effects. However, this didn’t bother me near as much as I feared they would. It looked passable for the most part, although there were a few spots where it was pretty fake looking.
The main problem I have with this movie is with the zombies themselves, or rather the way they are portrayed. Look back at the 68’ NIGHT OF THE LIVING DEAD. In that movie the dead are creepy, and scary, and a real threat. The living are in fear of these things, and don’t understand what is happening, and are running scared.
It’s been 40+ years and thousands of zombie movies later in real time, and unfortunately this has had an effect on the entire genre, Romero included. At the beginning of Survival we are told it takes place five days after infection. Five days. However, the people in this movie act as if they’ve been dealing with these things for years. They dispatch them with as little effort as taking out a bag of trash. There is ABSOLUTELY NOTHING scary about these zombies. People walk right up to them and shoot them, chop them, push them, hell, even punch them with no fear whatsoever. The islanders corral them and heard them like cattle, even keeping them in barn stalls like livestock. Oh, there are occasional adrenaline rushes where the characters jump into action at a moment’s notice, but little fear.
The zombies are relegated to a mere annoyance, and are robbed of everything that made them scary in the original. I think the reason Romero resisted making more zombie movies for so long is he felt he didn’t have anything more to say. The zombie genre is just tired, and Romero seems tired of it.
at Monday, July 26, 2010

Email ThisBlogThis!Share to TwitterShare to FacebookShare to Pinterest
Labels: George Romero, survival of the dead, zombies