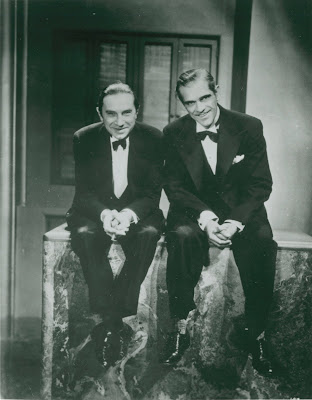 Here's a great pic of Bela and Boris together. I have always wondered exactly what the nature of their relationship was. I have heard that Boris kind of felt sorry for Bela and the way his career turned out. I have also heard varying reports on Bela's feelings regarding Boris and his successful and long lasting horror career. I think Bela probably regretted turning down the Frankenstein monster role in '31, and he might have harbored a bit of resentment over the fact his career wasn't as succesful as he felt it should have been. But I like to think the two men had, above all else, a large amount of respect for one another, and though they may not have been close friends, like Lee and Cushing, they were friendly nonetheless.
Click this picture to enlarge it - you can see some terrific details in it, such as the cigar Bela is smoking, Boris's checkered socks, the tuft of hair out of place on the back of Bela's head, and Boris' moustache.
Makes me wonder where they were and what they were doing when this was taken. They are in tuxes, but the room doesn't look like a theater, so it probably isn't a movie premiere.
at Thursday, November 04, 2010