My take on The Walking Dead 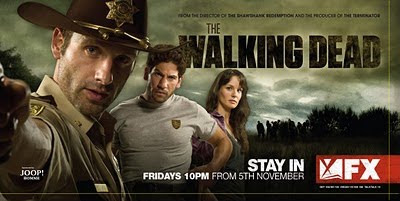 It was with a bit of trepidation that I finally sat down and watched the first three episodes of THE WALKING DEAD, the new AMC TV series that takes place during a zombie apocalypse. You see, I think I’ve reached zombie overload – the genre has become over-saturated to the point it’s become one big shambling cliché. Zombies are everywhere nowadays - Zombie Walks, Zombie Costumes, Zombie Proms, fer cryin’ out loud – and of course, let’s not forget the ever present low budget straight-to-video zombie movie releases – all of these and more have contributed to my state of over-zombification.

Add to that my newfound disdain for digital blood, thanks largely in part to George Romero and the latest in HIS ongoing zombie series, SURVIVAL OF THE DEAD, and you have a clear recipe for disaster.

You see, I knew going in that this was a zombie television series. I’m somewhat familiar with the comics that THE WALKING DEAD are based on, although I haven’t read them personally, so I sort of knew what to expect, story-wise. And I had heard that the series was ripe with digital blood effects, so I was dreading the plastic looking digital spray used so often in SURVIVAL.

But I decided there was no way I was going to miss out on a new horror TV series, so I got a copy of the first few episodes and settled in for a night of flesh eating fiends.

THE WALKING DEAD managed to make this feel fresh. I can’t exactly put my finger on just WHY this is the case, though. It certainly wasn’t the storyline. Nothing new there. The lead character, Sherriff’s Deputy Rick Grimes, is injured in a shoot-out and awakens in a hospital to find himself in a world turned upside down. A zombie plague has ravaged the country, and the hospital is abandoned and filled with both half-eaten corpses and some hungry undead as well.
This immediately brings to mind the 2002 film 28 DAYS LATER, in which a character awakens in a hospital to find himself in a world ravaged by a viral plague. The people who contract this virus, although not zombies by the Romero definition, are still, for all intents and purposes - zombies.

Actually, 28 DAYS LATER isn’t the first film to utilize that plot line. In 1951 John Wyndham wrote the novel THE DAY OF THE TRIFFIDS… in that book, (as well as the 1962 film version and the 1981 UK TV series and the 2009 UK TV series based on that book), the lead character awakens in a hospital with his eyes bandaged. He removes his bandages to find the world in a state of chaos, and he is one of the few humans who have eyesight. Everyone else is blind - and there are huge, walking, flesh eating plants roaming the countryside, to boot.

Come to think of it, THE WALKING DEAD reminds me more of the British made for TV version of THE DAY OF THE TRIFFIDS than 28 DAYS LATER. It is closer in tone to that production, and shares some other similarities story-wise as well. 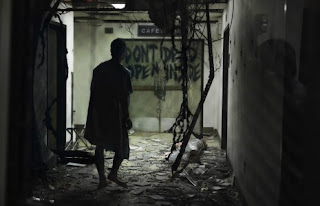 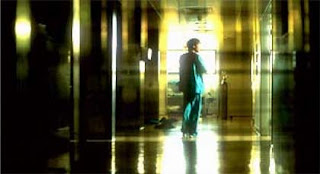 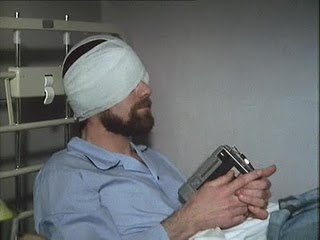 The Day of the Triffids Hospital Scene

THE WALKING DEAD actually didn’t add anything new to the zombie genre, either. They are, basically, Romero version zombies. They shamble slowly, seek living flesh for sustenance, and are destroyed by destroying the brain. Kill the brain, and you kill the ghoul – lesson one from NIGHT OF THE LIVING DEAD. Also, much like Romero, no reason is given for the zombie apocalypse. The audience is all too familiar with the rules of zombiedom nowadays, so no such explanation is needed. There are zombies roaming the earth. Now deal with it.

No, nothing new story wise, so how is it that it still seems fresh, not stale and boring like so many recent zombie productions?

I think several factors play into this. Number one – it’s a TV series, thus it’s paced differently than a movie. This is probably the biggest reason it works. There is more time for character development and mood building than if this were a movie. There are 6 one-hour episodes to this series – that is 6 hours to tell a story that would have to be rushed into 90 minutes if this were in the theaters. The pacing is slower, the mood more intense, and there aren’t explosions and giant special effects happening every few minutes. No, this is a much slower, quieter story, and it benefits from it.

Not that there aren’t action packed sequences. There are, and they’re done very well. The zombies all seem to move and act consistently. The makeup is fantastic, especially on the zombies we see close-up. The first zombie we get to see in detail, the crawling, rotting, half-corpse woman, is stunning. Simply one of the best looking zombies ever filmed in any zombie production. 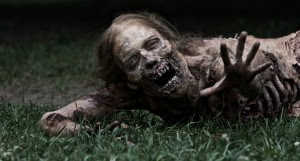 The digital blood is an unfortunate choice, as I always prefer squib and traditional blood effects over computer generated effects. They always look better. But I have to give the devil his due here – they are handled way better than in SURVIVAL OF THE DEAD, and are far less distracting.

I think the number one thing about the series that makes it work is the characters. This is a character based series. You care about Rick Grimes and what happens to him. You watch with nervous apprehension as he makes his way through zombie filled terrain. It isn’t the zombies that make this good – the threat could just as easily be Triffids, or rabid dogs, or any other monster you care to name – it just so happens to be zombies here. No, the thing that makes this work is that the characters work. The acting is good, the effects are good, the pacing is good.

The zombies in THE WALKING DEAD are not a mere afterthought, though. They are approached thoughtfully - they're more than mere special effects. When they work best, they are pitiful creatures. Shrunken, shriveled, emaciated versions of themselves – cursed creatures with just a touch of humanity about them. My favorite scene from episode one is when Rick returns to find the half-corpse woman I mentioned before, kneels beside her, and tells her, “I’m sorry this happened to you,” before putting her out of her misery. It’s a neat moment, and one that sets it aside from its undead brethren. The focus on so many recent movies is the zombies and their ghoulish nature, and you don’t care who these creatures were before they turned into ghouls. Sure, there are plenty of moments of mindless zombie mayhem here – but like I said, the times THE WALKING DEAD works best is when there is a touch of humanity injected into the ghouls. They are us, after all, only different.

So I’m looking forward to seeing the second half of this TV series. I understand it’s already been picked up for a second season. If as much care is put into season two as was put into the first one, AMC will have a sure-fire hit on their hands. 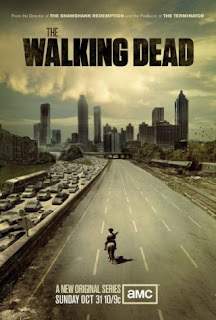 Email ThisBlogThis!Share to TwitterShare to FacebookShare to Pinterest
Labels: The Walking Dead, zombies