Today is the beginning of the Paul Naschy Blogathon! Blogs all across the cybersphere will be writing about the Spanish actor, director, and screenwriter Paul Naschy this week. I was asked to contribute by the organizer of the event, The Vicar of VHS over at Mad Mad Mad Mad Movies, and was more than happy to join in the festivities! I am going to kick off my own Naschy tribute with a review of a Paul Naschy movie from 1972, "Dr Jekyll and the Wolfman." 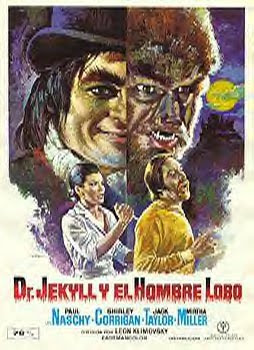 Over the Thanksgiving weekend I got a chance to sit down and watch “Dr. Jekyll and the Wolfman”. This DVD has been on my “to watch” stack for years, and I felt it high time I finally took a look at it.

This is the 6th movie featuring Naschy as the character Waldemar (pronounced Valdemar) Daninsky, a man cursed with lycanthropy, or werewolfism. The werewolf pictures are the ones Naschy is best known for, although he did a ton of pictures outside the werewolf genre. They are an interesting lot – Naschy wrote and starred in them, and his character comes across as a mixture of monster and superhero, with a touch of James Bond thrown in for good measure. The women of his films are always strikingly beautiful and unable to resist his charms – hey, it pays to be the scriptwriter - and there is usually lots of nudity involved. He is the same character in each film yet they don’t necessarily follow one another continuity-wise – they are best taken as individual stories totally separate from one another. He also usually dies at the end of the movie.
The other thing about Paul Naschy films is he loves mashing monsters together like the old monster rallies of the Universal heyday (House of Frankenstein, House of Dracula, etc). In this film he combines the Wolfman and the Robert Louis Stevenson character, Dr. Jekyll. But he gives it a unique twist – Jekyll doesn’t turn into Hyde in this movie – NASCHY does!! 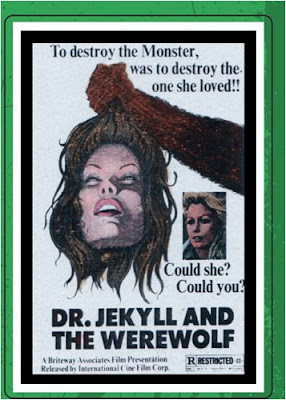 This film kind of works in three parts – the first part of the movie is almost a prologue, introducing us to a newlywed couple planning a vacation to Transylvania to visit the husband’s family burial grounds. We are also briefly introduced to Dr. Henry Jekyll here – but we won’t see him again until the third act.

The second part of the movie sets up Daninsky as the werewolf. It takes place primarily in Transylvania, where our vacationing couple meet with tragedy. The husband is murdered by local thugs while they are visiting his family’s graveyard, and his wife, Justine, is about to be raped when Daninsky shows up. He appears out of nowhere, like some black clothed superhero. He battles them off, killing two of them in the process – one by violently smashing his head with a giant rock! He takes Justine back to his home, a huge castle, and nurses her back to health. The two fall in love, and Justine discovers the truth about Daninsky – he is a werewolf.

She convinces him to return with her to London where she knows a doctor who may be able to help him with his affliction. This is where the third act begins. This doctor is the aforementioned Henry Jekyll, grandson of the infamous doctor who created a formula to release the dark side of one’s nature. Jekyll tells Daninsky he thinks he can help him. His plan is to inject Daninsky with a modified version of his Grandfather’s formula on the evening of a full moon. This will release the dark side of Daninsky’s personality, which will be stronger than the werewolf part of him, thus preventing him from changing into the werewolf. At that point Jekyll plans to inject Daninsky with the antidote, returning him to normal, and thus curing him of his lycanthropy. Uh-huh. Makes perfect sense. 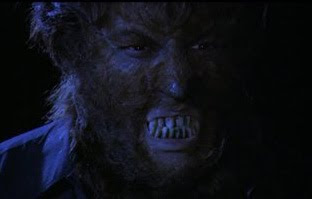 As you can imagine, things take a turn for the worse and we soon have a Daninsky/Hyde character stalking the streets of disco London. He cruises bars and strip clubs, picks up prostitutes, and leaves a trail of naked, ravaged bodies.

Naschy does a great job playing the Hyde character here - with just minimal makeup he is able to pull off a totally different persona quite convincingly. He wears a top hat and coat while playing Hyde, giving a nice nod to the traditional Jekyll and Hyde movies. I really like that Dr. Jekyll wasn’t the one who is injected with the formula in this movie. It made for a neat twist to the story, which actually takes several unexpected turns throughout its 96 min run. It does have some pretty far-fetched plot points, but there are more than enough good things going for this film to make it worthwhile. Definitely worth watching – track down a copy if you get a chance, and make sure it’s the unedited 96 minute print with all the violence and nudity intact.
at Monday, November 29, 2010