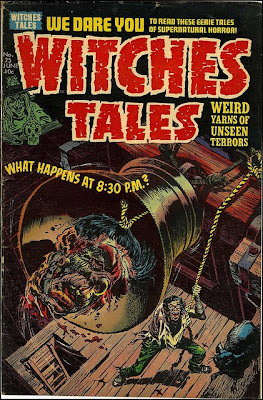 It's always amazing to me how shocking some of these covers for the old pre-code horror books were. This book is from 1954 - it's the cover to issue #25, published June 1, 1954, of Witches' Tales. It was published by Harvery comics, and the cover is by Warren Kremer.


What an awesome cover! This is every bit on equal to the best of the EC covers. The severed head as the clapper of the bell is genius. Ole Quasimodo gets even after all, eh?


Here's the preliminary art for this cover, once again done by Warren Kremer... 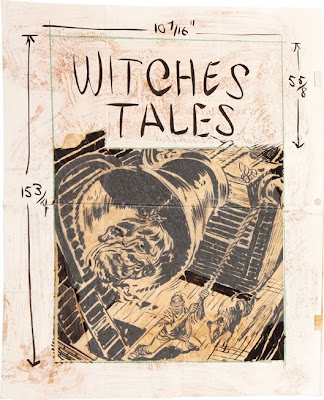 Warren Kremer was an interesting guy. He is best known for his work at Harvey Comics, where he created the characters of Richie Rich (named after his son, Richie) and Hot Stuff the Little Devil. He prooves here he could certainly do more than kiddie fare - look at the dynamic composition, the angular lines of the beam of wood, the grotesque details of the severed head, the triangular composition with the rope leading down to the perfect focal point of a grinning, insane hunchback!

I have a little bit of a personal tie with Kremer, in that a Hot Stuff comic was one of the first comics I ever bought. I remember very clearly my Grandmother taking me with her to the laundry mat, and sending me next door to get come comic books to occupy my time - no doubt I was bugging her incessantly. I picked out a Spiderman comic, and a Hot Stuff the Little Devil comic, and loved them both. From that point on I was hooked on comic books, and this lead me on my own path to creating, drawing and publishing comics.

So here's to Warren Kremer, and his awesome art. Still awesome 56 years later! Now I just gotta find this for download somewhere on the web!