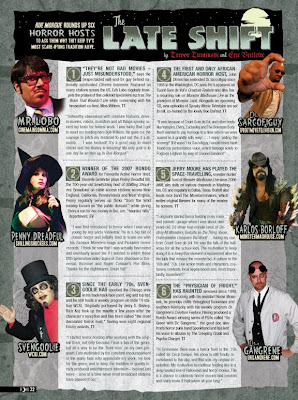 The August 2010 Issue of Rue Morgue Magazine (#103) featured an article on TV horror host Count Gore DeVol. Count Gore, played by actor Dick Dyszel, is one of the legends in the field - he has been hosting movies off and on since the 1970s. He currently hosts a weekly web program at http://www.countgore.com/.

Gore was, interestingly enough, the very first horror host I came in contact with when I began my show back in the late 90s. I had no idea there was anyone else doing this at the time, and Gore discovered me through the internet. We met in person a few months later and a struck up a friendship from that point on.

Along with the Count Gore article Rue Morgue also ran a page that spotlighted 6 of the top hosts working in the field today, besides Count Gore of course. I am proud to have been included in this bunch, and was glad to see my Dreadful HallowGreen cohort Penny Dreadful in there as well! Click to enlarge and read...
at Friday, November 05, 2010