One of the great things about EC comics was that they didn’t force artists work in a “house” style. In fact, it was quite the opposite. Gaines insisted each artist develop his own signature style of art. He even ran bios on the individual artists in the books so fans would get to know them better. 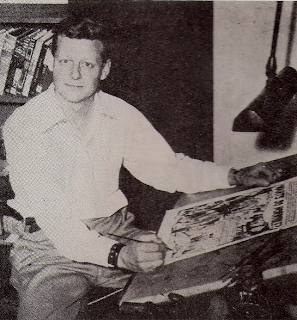 One of the most popular artists of the EC stable was Ghastly Graham Ingels. Graham was born June 7, 1915 in Cincinnati, Ohio.  His father was a commercial artist, and Graham inherited his talent and interest in the arts. Graham was just a teen when his father died unexpectedly. This was something Graham shared in common with EC head honcho Bill Gaines, whose father also suffered an untimely death. I believe this common bond helped keep Ingels onboard during tough times, both in the early days before the horror comics took off and again later when personal problems developed.

According to Feldstein the earliest work of Ingels was a bit disappointing – but they knew the talent was there. Once they began the horror line of comics they quickly discovered Ingels was a master of composition specializing in decomposition – NO ONE could draw rotting corpses like good ole Graham, prompting them to nickname him Ghastly. This moniker stuck, and he began signing his art “Ghastly” with issue #10 of The Haunt of Fear in the story “Grave Business.” 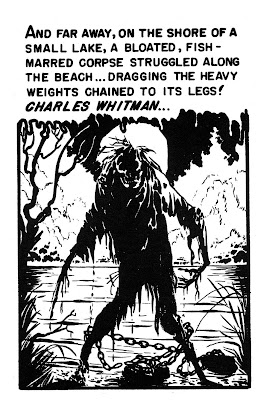 The Haunt of Fear was Ghastly’s signature book – he drew the lead character, The Old Witch, and the feature story in each issue. He also took over the cover duties starting with issue #11. This cover is, to me, one of the creepiest of all the EC covers. There are much more graphic and gory covers, but there is just something disturbing about this old man burying his wife in the dirt cellar of the basement. It’s the face of the old lady, perfectly placed as the focal point of the picture, that is so creepy – killed by her own husband, he is standing there with a shovelful of dirt about to toss it over the face of his wife of decades. Morbid, creepy, and effective – pure EC.

Ghastly Graham Ingel’s work drips off the page. You can always tell his style immediately – it oozes across the page. It doesn’t need any color to emphasize his work – in fact, the black and white reprints of his work actually enhance the impact of the stories. He wasn’t afraid to use darks and shadows and spotted the blacks on his page perfectly. The line quality had a painterly feel to it, and it was a natural progression for him to begin cover chores as well as interior art. 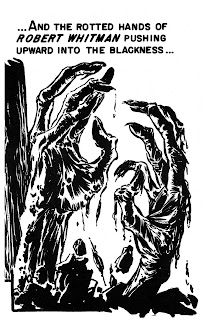 Ghastly was raised a devout Catholic, and apparently struggled internally with his work in horror comics. He began drinking heavily. According to the Digby Diehl book “Tales from the Crypt” (a fantastic resource, by the way), Ingels began having trouble meeting deadlines because of his drinking, so Gaines and Feldstein gave him early deadlines to ensure he’d have his work in on time.

After EC stopped publication Ghastly found himself out of work. Like many folks who are so successful they become associated with their line of work, Ingels became associated with horror comics and it was difficult for him to find work in other fields. He eventually stopped drinking and moved to Florida, where he took up teaching art to students in the area. He focused on teaching art and had nothing to do with EC comics, turning his back on that part of his life completely. Feldstein even had to track him down and force him to accept royalty payments for his previous work.

Graham died on April 4, 1991. Shortly before he passed away he made peace with his past and did a series of commissioned paintings of his old pal, the old witch. Ghastly was one of the most influential artists of the entire EC stable - his style just screamed horror. Take a look at any Bernie Wrightson work and you can definitely see Ghastly's dripping influence. 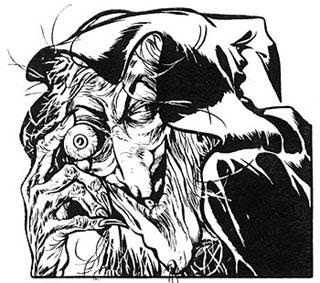