I’m proclaiming it EC comics week here at my blog.

As I mentioned last week, Bill Gaines and Al Feldstein headed up this “New Trend” in comics. They had previously been publishing, ironically enough, wholesome family comics such as “Picture Stories from the Bible” and “Picture Stories from History” under the company banner Educational Comics. They had also been losing money. When Bill took over he changed the company name to ENTERTAINING Comics – thus emphasizing the shift in subject matter while retaining the EC logo.

One of Bill’s first hires was an up and coming young writer/artist named Al Feldstein. One evening the two were discussing their common love of old horror radio dramas, programs such as “Lights Out”, “Suspense” and the “Inner Sanctum”.  They wondered what would happen if they tried the same thing in comics.

They decided to test the market... In issue #15 of their comic CRIME PATROL they slipped in a horror story among the crime fare, and the Crypt Keeper made his first appearance. The story he introduced was called “Return from the Grave” and was, appropriately enough, a shambling corpse story.
In Issue #10 of WAR AGAINST CRIME they inserted another horror story, and the Vault Keeper made HIS debut. He hosted a story called “Buried Alive.”

Sales increased immediately, and the characters were popular with readers. They ran another Crypt Keeper story in Crime Patrol #16, and another Vault Keeper story in War Against Crime #11. Again, sales jumped, and Gaines decided this was proof enough. They changed the name of both books but kept the numbering the same to avoid having to purchase new mailing permit fees for new titles. Crime Patrol became Crypt of Terror #17, and War Against Crime became Vault of Horror #12. Crypt of Terror would go on to change names again slightly to Tales from the Crypt. 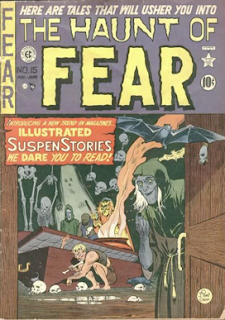 Along with this switch in names, which occurred in January 1950 (April/May cover date), they added a third comic, The Haunt of Fear, hosted by the Old Witch. And thus the EC unholy trinity of Ghoulunatics was born and their three horror titles shambled off into the night, to the delight of fans. 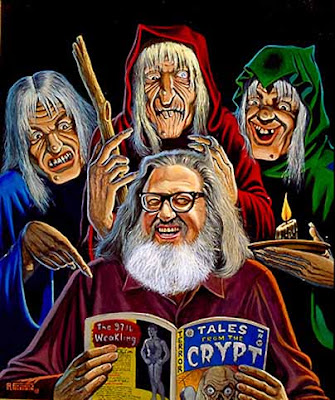 Painting of Bill Gaines, (later in his career with full beard)
and the Ghoulunatics, (left to right): TheCrypt Keeper, The Old Witch,
TheVault Keeper
at Monday, March 15, 2010