questions about The Wolfman... 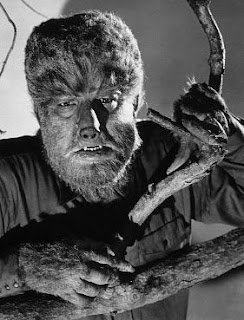 In the poll I posted here I asked "What is your favorite Classic Universal Monster?" Among the readers who voted, The Wolf Man came out the winner, slightly ahead of Frankenstein. I thought this was interesting, as I’ve always been more of a Frankenstein guy myself. But I DO love the Wolf Man, and that original 41 film is one of my favorite Universal movies. I don’t know if maybe folks had Wolfie on the mind when they voted, with the new movie in theaters and all, but regardless the furball came out on top!

Speaking of which, I was discussing the Wolfman movie with a coworker back and forth through email last week, and she asked me a couple of questions regarding the new film. There are going to be some spoilers here in the next bit, so if you don’t want to see them you might skip the rest of this post.

Both questions were regarding Anthony Hopkins character, Sir John Talbot. I told her I would sort of pass them along here and see what you guys thought.

First, she asked:  Do you think the father killed his eldest son to get Lawrence Talbot to come back home so he could pass on the “curse” to him and they could rule the countryside together?

Her second question was: Did he kill the eldest son because he was told his father was a werewolf by the gypsies?

Both are interesting theories. I hadn’t really considered either – if we take Sir John Talbot strictly by what he says, then he simply slipped out one night and accidently killed his son. But perhaps there was more to it. John knew of his affliction and had his manservant lock him up in the room on evenings of the full moon. Perhaps he escaped his bonds that night on purpose, knowing his son would be out and about. He was pretty much obviously in the throes of madness. Perhaps the shame of murdering his wife caused him to snap, and he intended to snuff the Talbot line completely.

All interesting theories – so what do you ghouls think? Anything more to it or was it simply as Sir John said, an accident?
at Monday, March 01, 2010