I finally got a chance to watch the DEADLIEST WARRIOR episode VAMPIRES VS. ZOMBIES on Netflix this week. I’d heard about that episode but never actually tracked it down. Once it appeared in the Netflix cue I knew I had to watch it. After all, it’s a pretty neat premise and just more proof of how mainstream horror pop culture has become.

DEADLIEST WARRIOR is a pretty cool show. Most of you have probably seen it, but for those who haven’t it’s a series that airs on Spike TV in which two famous warriors from history, such as Napoleon and George Washington, are squared off against one another. A team of experts study the weapons, armor, fighting techniques, etc. of each combatant and attempt to simulate what would happen if the two actually battled. They test the weapons on a number of targets such as ballistic gel torsos, pig carcasses, etc. and measure the impact, damage, precision of the weapons, etc. They also test the armor of each combatant to see how it withstands the opponent’s weaponry. Experts on each combatant are consulted to take into account variables such as battle technique, specialized attacks, etc. Points are assigned for each of the tested categories and all the data is compiled and fed into a computer which then simulates the battle. They run the simulation 1,000 times to determine which warrior would win the fight. Finally they show the winner through a video simulation of the fight using live costumed actors to reenact the outcome.

Of course there is no way to really prove something like this definitively, but it is still a really interesting program. You get a chance to see each warrior’s weapons in action and just how effective they are. The sword of Vlad the Impaler had to be the single most impressive weapon of any, in my mind. That thing was amazing – it sliced through an entire pig carcass with one swing as if cutting through a slab of butter. It was insane. 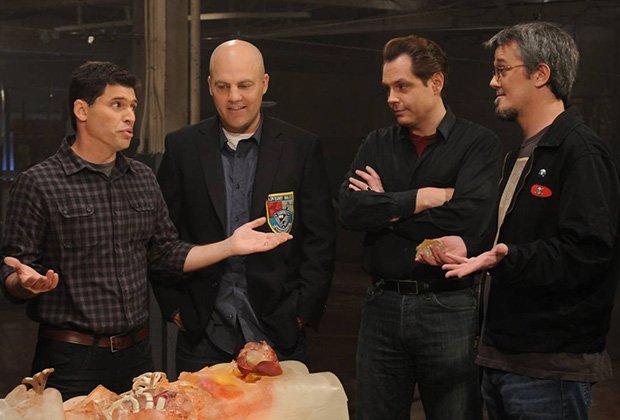 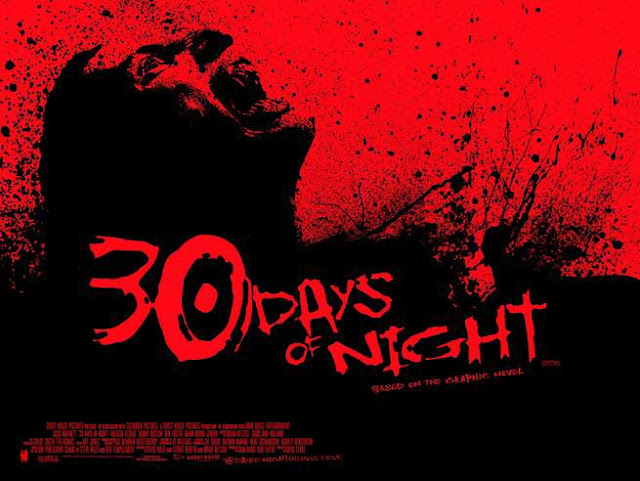 The first question to be decided was what type of monsters was squaring off, because as you know the rules for each vary from movie to movie. For the zombies they chose the slow moving viral-induced zombie, such as seen on THE WALKING DEAD. For the vampire they chose the 30 DAYS OF NIGHT style vampire, a more vicious pack hunting type creature. The weapons for this episode were simpler than usual, because they were very limited. Zombies had their teeth, grasp, and lack of pain. Vampires have teeth, claws, and speed. They also factored in the vampire’s hunting instincts and intelligence, and the zombie’s sheer numbers and viral infectiousness. They rigged some interesting devices to test the effectiveness of each creatures attack forms, assigning the approximate bite strength of a Rottweiler dog to the zombie, and the bite of a crocodile to the vampire.

But for these vampires the most impressive weapon is their claws, capable of crushing a human skull with one blow. These zombies follow the “destroy the brain, destroy the zombie” rule. So the ability to crush a skull and deliver a kill strike with a single swing is a huge advantage, especially combined with their super speed. You’d think it would be a clear cut contest in favor of the vampire – but they didn’t match them one on one. These zombies travel in hordes, and their sheer number s make up for their slow shambling and lack of mental facilities. I can’t remember exactly the ratio but it was something like 60 to one in favor of the zombies. They used 4 vampires, so it was around 240 to 4.

I won’t spoil the outcome, you’ll have to watch it for yourself to see which creature wins. It is available through Netflix streaming and I believe you can see it on the Deadliest Warrior webpage on the Spike TV site, too. http://www.spike.com/full-episodes/q7bq0v/deadliest-warrior-vampires-vs-zombies-season-3-ep-310

I do want to talk about one thing they addressed but really didn’t take into account too much, and that is the zombie’s viral nature. As these zombies originated from a virus they are highly contagious. This virus is similar to AIDS, meaning their bodily fluids – blood and saliva – are the means through which the virus is transmitted. The question this obviously raises is – what happens when a vampire becomes infected? Or can they even become infected at all? 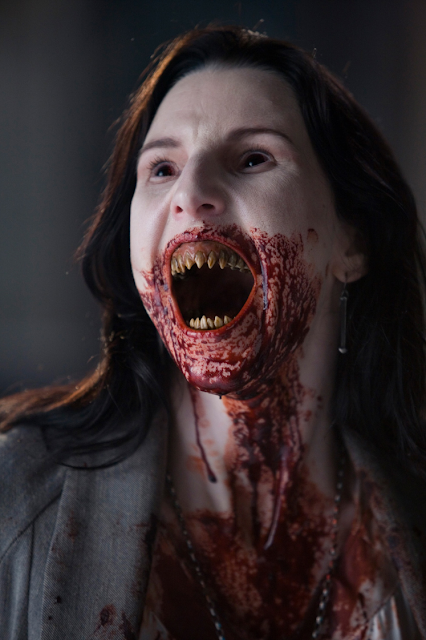 If blood keeps these vampires alive then their bodies are functioning to some degree and processing nutrients from that blood. Therefore taking in tainted blood would naturally have an adverse effect of some sort. What would a zombified vampire look like? How would it act? Interesting questions.

But I would think the last thing a vampire would feed on is a zombie. Think of the most rotten, fetid food – disgusting, maggot-filled stinky meat or moldy, sour milk that’s months old. That’s what I envision a zombie smells like. Now imagine your senses are heightened to a super human heights – like a dog or a bear, where you’re able to smell food from a distance. Imagine how potent and disgusting a zombie would smell – their blood-soaked sour clothes and rotting flesh combining with the raw unprocessed meat in their bloated belly. Ever smelled a dead animal? You know how awful it is. The smell of death is a distinctive odor, unforgettable, and it permeates everything. Imagine that smell multiplied by the teens, or hundreds, or thousands.

Now would you want to make a meal of that? Of course not. And neither would a vampire. I believe, if I were writing a screenplay under this scenario, I would make a zombie toxic to vampires. They wouldn’t become zombie-vampires if they fed on one, but they would become sick and die. The rotten, infected blood and flesh are poisonous, of no use to a vampire nutritionally speaking. This would probably change the outcome of that Deadliest Warrior scenario a bit, as one of the major weapons of the vampire was its bite. 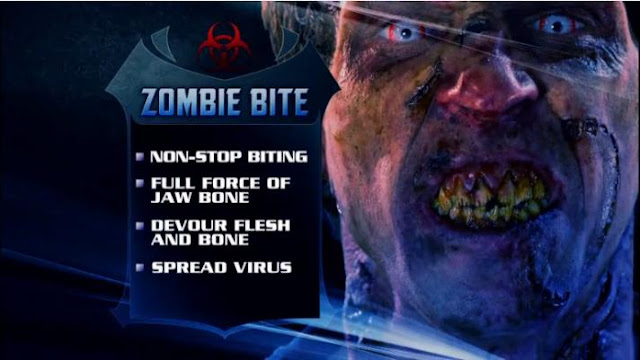 The next question is whether a zombie can eat a vampire, and what effect would that have? A zombie is akin to a shark in my mind, a mindless eating machine. They have little brain function and exist to only to feed. What keeps zombies from turning on one another and attacking and eating each other? I can only assume they need fresh food, that they somehow can sense if something is alive. I don’t believe they operate on sense of smell, as their sense of smell would be dulled by their own disgusting odor as described above. So using the shark analogy, perhaps it is movement that triggers the zombie hunting instinct. Maybe like in SHAUN OF THE DEAD a living human could imitate the dead and pass unnoticed, as long as you didn’t get too close.

I’m going with that theory for my hypothetical screenplay, so therefore zombies would definitely go after a vampire. And since these zombies feed on all human tissue, not just brains as in RETURN OF THE LIVING DEAD, they would rip them to shreds and consume them.

Do zombies digest food? Nope, I don’t think so. Their bodily functions have stopped and therefore they don’t process food. They don’t piss, don’t defecate, don’t breathe. There is still stomach acid, so some of the food would be processed, but it isn’t passed along the digestive tract. The remaining feces from their last living day would probably be pushed out, thus all zombies would shit themselves. They’re a truly disgusting creature. Shark-like, they would eat until their distended bellies burst and all the rotten meat spilled onto the ground, then they would continue to eat more.

But would they eat Soylent Green? That’s something that crossed my mind as I was driving earlier today. Now for you folks who may not have seen this classic dystopian futuristic film I worn you to stop reading now – I’m talking to you, Miss Bren! I never want to be accused of being the guy who throws out spoilers, even to a film that is almost 40 years old. So this is your spoiler alert!


Would they eat a synthetic food substance? Nope, not my zombies, even if it’s made of people parts. Remember they operate on movement. If it moves like food they treat it like food. Humans, dogs, cats, mice – anything that moves is food. Even sharks, a-la Fulci’s ZOMBIE. They wouldn’t even notice Soylent Green if you dumped a bucket of it over their head.
at Friday, August 31, 2012