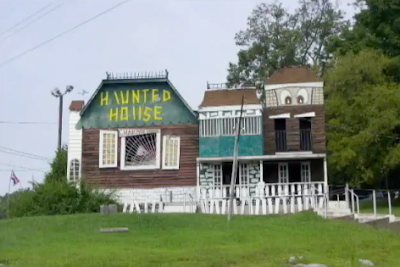 This video is of a now abandoned walk-through style haunted attraction located in southern Kentucky in an area named Cave City. It is still standing, but closed to the public - it was in a bad state of disrepair when I took these pictures back in 1993, and finally just fell completely into a state of disrepair.

It was a classic walk-through funhouse style attraction, and in it's heyday was probably pretty darn cool. I still found it awesome, even though it had obviously seen better days. As you worked your way through the house various props would spin around, light up, or pop up at you. Or at least they were supposed to - about half of them were no longer functioning. They charged us a dollar each to walk through as many times as we liked that day - and we had fun going through over and over. I'd love to buy that thing and restore it to it's former glory... but I'm afraid one of these trips through Kentucky I'll see it demolished. So here is a video to preserve it for all posterity - Our trip through Charmin' Charles Haunted House!

To learn more about Charmin' Charles and see more photos go to:
http://www.laffinthedark.com/articles/gunmountain/gunmountain.htm
at Monday, August 23, 2010