Greetings Fright Fans – it’s time to continue our look at the pioneers of horror rock and roll.
Before I begin with our latest nominee into the Horror Rock timeline I thought I’d post links to all the entrants so far:

Pretty impressive list! Our latest entrant recorded what is arguably the most recognizable spooky song ever recorded. It is a song that is loved universally and has been covered by tons of artists throughout the years as diverse as Zacherly and The Misfits. The man I’m talking about is Bobby “Boris” Pickett, the man who did the Monster Mash. 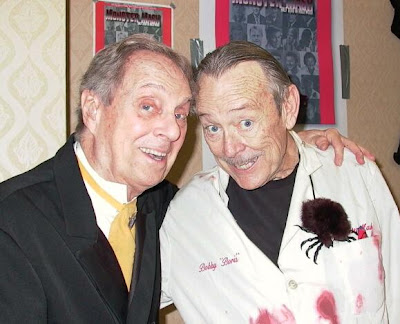 
Much like previous entrant Sheb Wooley, Bobby makes my list because of the sheer importance and impact the Monster Mash had. Born February 11, 1938 in Somerville, Massachusetts as Robert George Pickett, Bobby was the son of a theater manager. This allowed him to see many horror movies on the big screen growing up, and left a lasting impression on young Bobby. He mentions in interviews seeing all the Universal classics in the theater and being greatly influenced by them. This would carry through to his later creative endeavors.

He went into the military and served in the Korean War in the US Army. It was there that he started singing with a doo-wop group entertaining troops. Once out of the military he worked as a stand-up comic. Here his classic monster roots began to show, as he worked up a special bit in the middle of his routine featuring impressions of Boris Karloff and Bela Lugosi. 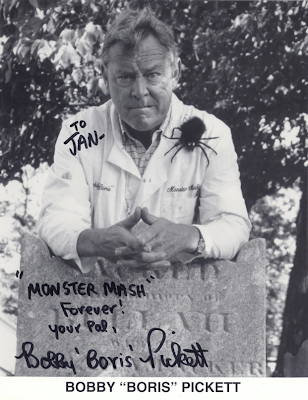 The song invents a new dance, the Monster Mash. Bobby sings the song using an impression of Boris Karloff (and Bela Lugosi in the line “Whatever happened to my Transylvania Twist) as the monster’s maker, reprising the voices he used in his stand-up routine years earlier. The song was written quickly by Bobby and Lenny, and was more popular than either ever imagined. Bobby would go on to perform live on a variety of shows including American Bandstand, the Steve Allen Show and The Dating Game.

Funny thing is it was initially turned down by every major label. Producer Gary Paxton - who also did all the sound effects on the song, by the way – pressed 500 copies of the song on his own label, Garpax – and drove around to individual radio stations handing them out. It became a huge cult success, and London Records called wanting to sign Bobby and release the Monster Mash, which became a number 1 hit. The record was called “The Monster Mash” by Bobby Boris Picket and the Crypt Kickers.

Bobby recorded other novelty records including Monster’s Holiday, Graduation Day, and The Monster Rap among others. He went on to do some acting on TV in such shows as Bonanza, Petticoat Junction, The Beverly Hillbillies, T.J. Hooker and others, and in a number of films such as Deathmaster, Strange Invaders and Lobster Man from Mars. However, it was for The Monster Mash that he was forever best remembered. Bobby passed away on April 25, 2007, after a battle with leukemia.
at Friday, August 13, 2010