I finally had a chance to sit down and watch The Dead Matter, the new movie by Midnight Syndicate's Ed Douglas, and have to say I really enjoyed it. This is Ed's first feature length movie - it is basically an expanded version of a short film he made years earlier. Ed wrote, directed, produced and edited this movie, so I think it's safe to say it's a real labor of love. 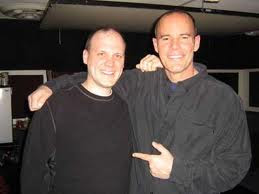 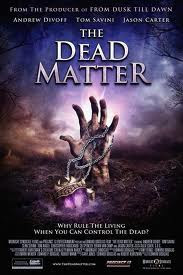 This movie basically tells two stories that intertwine. One is the story of a vampire and vampire hunter who are both seeking an ancient relic (a scarab amulet) that has the power to control the dead - One to control it, the other to destroy it. The second story is about a group of friends who unwittingly stumble across this amulet and are drawn into this conflict, and in the process find themselves in a world of the supernatural.

There are walking dead in this movie but they are not zombies by Romero standards – they don’t bite people and pass on some contagious virus. Nope, they’re just good ole shambling mounds of flesh. Very refreshing in this age of Romero remakes and rehashes.

The amulet is an interesting plot device in and of itself and my very favorite scene happens when the protagonist, Gretchen, played by actress Sean Serino, first learns the amulet has special powers. She is awakened by a strange sound and the amulet glowing. The sounds are coming from her refrigerator. When she opens the fridge she finds all the meat inside writhing and pulsating, as if trying to come back to life. Very cool scene here. 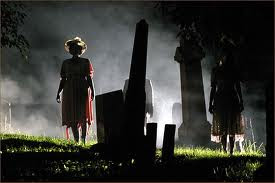 The cinematography is really beautiful – this is one great looking movie. There are cameos by two of my fellow horror hosts, Count Gore DeVol and Big Chuck Schodowski, which I was really glad to see. Veteran makeup guru turned actor Tom Savini is in this one as well. But Jason Carter steals the show in the role of Vampire hunter McCalister. He's great in every scene and really does a terrific job.

The Dead Matter has plenty of violence and gore but no nudity, and not much in the way of language that I remember, so it is a pretty family friendly horror film. The music is all by Midnight Syndicate, of course, and is their usual terrific spooky stuff. I would love to host this one on the air one day, as I think it would really go over well on television, especially around Halloween time.

This movie is available for a limited time at Hot Topic stores nationwide. It is packaged with two Midnight Syndicate CDs as well, so it is quite a deal. Pick it up while the getting is good!