Greeting Fright Fans –I’m pleased to welcome special guest Brian Maze in the lab tonight. Brian is a comic book artist and creator and publisher of the comic book The 13 Hosts. 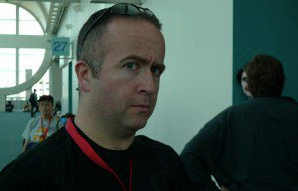 Dr. G – Howdy Brian, glad to see you found you way to the lab here. Hope the trip to Shackle Island wasn’t too treacherous.

uhhhh, the captain of the boat looked an awful lot like the Grim reaper, but other than that it was only mildly treacherous. Do you always interview your guests in Electric Chairs?

Dr. G – Only the lucky ones... I have to say I’m a big fan your work, Brian. You have a great style – clean, cartoony yet super expressive. You really capture the likeness of your subjects. Tell me about your artistic influences, if you would, and what got you started in the world of comic book art.

A very pretty art teacher, nothing makes you want to draw more than a pretty teacher.

Dr. G – Looking at your artwork it’s obvious you’re a fan of horror movies. Were you always a fan of this stuff growing up or did you come by it later in life?

I like old horror films & Sci-fi films but mostly the ones that were over the top films like The land that time forgot, The Abominable Dr. Phibes, or Abbott & Costello meet Frankenstein

Dr. G – You are a big supporter of horror hosts in your work - Did you have a horror host in your area, and if so who was it?

I grew up in North Central West Virginia, all of our channels were from the Pittsburgh feed. I used to wake up after the folks went to bed and watch Star Trek, and Chiller Theater with Chilly Billy Cardille came on afterwards. I would stay up and watch films like "The Mole People" with Hugh Beaumont (Ward Cleaver). 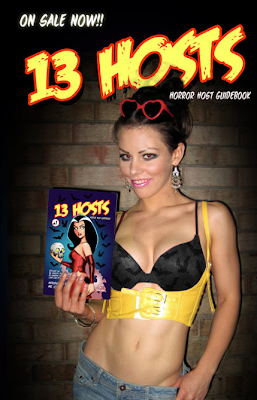 Dr. G – You published a terrific comic book called The Thirteen Hosts. Tell my viewers about that comic, if you would.

13 Hosts is a sort of Who's Who's of Horror Hosts across the country. The book spotlights 13 different hosts and provides a bio and show information. Plus the book also contains artwork & comics with a sci-fi/horror theme. 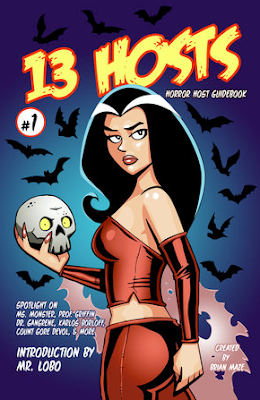 Dr. G – The 13 hosts was a great idea and I was honored to be included in it. Are there any plans to put out a second 13 Hosts book, and if so, any idea which hosts you might spotlight this time around?

There is plans right now to do a second book, I have some hosts in mind but no definite as to who will be in it.


Dr. G – Your website is called Monkey goat boy – awesome. Tell me about that character.

Steve the Monkeygoatboy is one of two main character from my comic book series "Freak Central". Freak Central centers on the staff of Supermarket Tabloid that investigates the Supernatural. Steve is the photographer for the paper. He is also the mascot for all of art endeavors.


Dr. G – Any other future projects we can look forward to?

Dr. G – Thanks for spending some time here in the lab with me, Brian. Best of luck with future endeavors and watch out for the werewolves on your way out. They’re kinda’ snippy this time of year.

To find out more about Brian Maze, his artwork, The 13 Hosts or to commission Brian to do artwork, contact him at his facebook page: