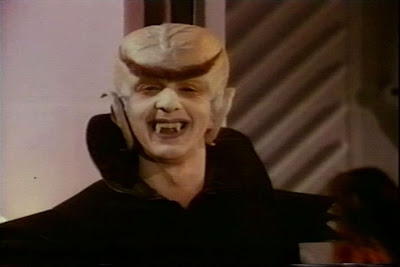 Or something like that - the episode is actually called Space Vampire, and I just watched it on Netflix. It's from season One of the old 70's TV series Buck Rogers. Now I used to watch Buck Rogers religiously when I was a kid - hell, back then we only had 4 channels, so anything even remotely science fiction in nature was a treat. But I don't ever recall this episode.
In it Buck and Wilma are out on a nice little space cruise in a small spaceship. They stop in at a space station to drop twiggy, the robot, off for repairs so they can get a little alone time at a nearby space resort planet. Yowza! Wilma is looking extra fine, as usual, in skin tight spandex - this particular suit has a bare midriff to boot.

Soon after they land a derelict ship crashes into the station. It is The Demeter, and all the crew onboard are dead, their life force having been drained from their bodies. Unbeknownst to Buck and Wilma, however, the bodies aren't the only thing onboard this craft - there is also an alien entity onboard that is now loose on the station. It first takes the shape of a glowing red ball of light, looking like something from the 60's Star Trek series. It later materializes and shows itself as the Space Vampire it is - a being called the Vorvon. Upon further investigation the ship doctor discovers there are two strange markings on each of the dead crew member's necks. This futuristic sawbones has no clue what could have caused it, but Buck, with his superstitious 20th century mind, begins to suspect the truth. He phones home to Earth and has them do some investigation on the ship. Turns out the Demeter was formerly owned by a Captain Helsin, a bounty hunter. Turns out the Vorvon killed his parents and Helsin was chasing him seeking vengeance. But apparently things didn't quite go as planned and the Vorvon got the better of Helsin. Silly vampire hunter - I mean, bounty hunter. 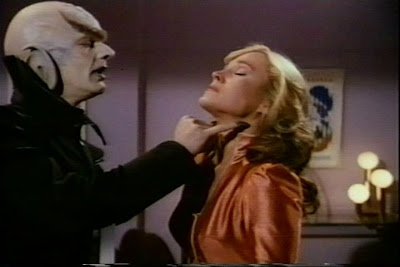 The Vorvon, as any hot blooded male, alien or otherwise, would, immediately sets its sights on Wilma. it must have her! Along the way it drains a few humans until it finally gets Wilma alone - but wait! It doesn't just suck the blood from her neck. Oh no - this vampire is way too cool for that. He uses the devil horns a-la Ronnie James Dio, like some satanic vamp rocker, placing his fingers on either side of her neck to drain her energy.

He raises the dead members of his crew and they come back to life to do his bidding, They are, honestly, very little help. Like the zombies in Night of the Living Dead they're slow moving and all messed up - they kind of slow Buck down but don't stop him. The Vorvon decides to hightail it out of the station with his new Vorvon bride. He highjacks the nearest craft and flies off the station, but turns out Buck has a surprise in store - he has sabotaged the ship. He got word from Earth that the Vorvon can be destroyed by an overload of power, as Buck phrases it "Just like Dracula couldn't stand the light of day." Buck has reprogrammed the ship to fly into a fiery planet, and Wilma escapes just in the nick of time.

The neat thing about this episode is the obvious ode to Nosferatu and vampire movies in general. The vampire is bald like Nosferatu, and has similar (but somewhat more goofy) looking features. The ship is the Demeter, which is the same name as the ship in Nosferatu that also sailed into port with a cargo of dead crew members and a thirsty vampire. There is the a fore mentioned Dracula reference as well as the Bounty/vampire hunter Helsin, which is only one letter and a Van removed from vampire hunter Van Helsing of the original Stoker novel.

All in all a goofy but fun episode - Don't know how I missed this one, or if perhaps I saw it and just don't remember - Either way it was great to see it this time around.

Here's the trailer for the episode: