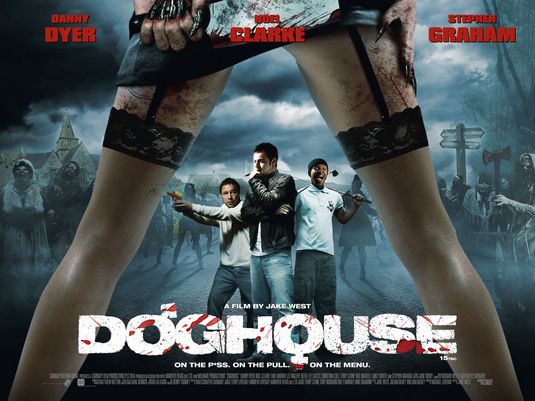 A Facebook friend recommended the movie DOGHOUSE, available on Netflix streaming, so I settled in late Saturday night with a 2 liter and a bag of popcorn and gave it a whirl. Doghouse is a British film made in 2009. It is billed as a horror/comedy zombie film – which made me initially think of Shaun of the Dead, (especially in the pub scenes) - but this film quickly develops its own style. It was written by first time film writer Dan Schaffer, and directed by Jake West, who has previously shot mostly short films and documentaries.
Doghouse tells the story of a group of guys who decide to get away for the weekend for a boys only vacation. Their friend, Vince, is going through a rough divorce so they take him away to a town called Moodley for a weekend of drunken debauchery, as the female population in Moodley is 3:1 women to men. Once there they discover things aren’t quite as picturesque as they’d imagined – in fact, all the women in the village have been turned into homicidal maniacs who feed on the flesh of men. Their rage is only directed toward men, however, due to a military created virus designed to turn half the population against the other half. The town of Moodley was their test case, since it’s in the middle of nowhere, and the boys unwittingly stumbled into town at the wrong time.

Okay, where to start with this thing… first and foremost, I know it’s a comedy, and not to be taken too seriously, but c’mon – a virus that only affects women? I get that you’re looking for a different twist on the zombie plague, and appreciate that, but this is the best you can come up with? Dumb dumb dumb. And even worse we are later introduced to a device, again military made, that emits a high frequency sound that “can only be heard by women” that stops them dead in their tracks, leaving all the women helpless to the mercy of men. Puts the date rape drug to shame! 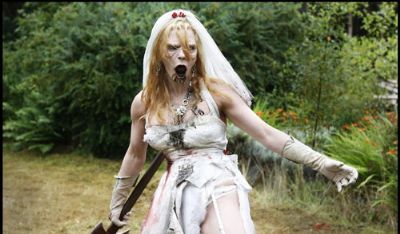 This film is hopelessly misogynistic, from the plot device of the virus to the very name of the town, Moodley - get it? Moody women, MOODley – how clever. The women in the film are either a parade of zombies in sexy attire or hideously ugly and fat – no in between. Let’s dress up this one as a sexy bride with an axe, a sexy hairdresser with scissors, a sexy goth, a fat housewife, etc. In fact, at one point the guys, who are all varying degrees of chauvinistic assholes, have a discussion about which zombird, their pet name for the zombie women (bird being a British slang for women, of course) they’d still bang. There is one gay guy in the group but of course he is killed, along with all the fellas with any redeeming qualities to their character. Toward the end of the film Vince finally burns the picture of his soon to be ex-wife that he carries around, as he realizes his independence from the evils of women. About damn time chimes in his buddy.

It’s as if this script was written by a horny high schooler working out all his pent up frustrations toward women on paper. The film is so blatant with its disdain toward women I felt I had stumbled into a monthly meeting of the He Man Women Haters Club from The Little Rascals. I was really embarrassed for it – despite decent production value and effects I definitely cannot recommend this one, as it’s every bit as insulting as some man hating Lifetime channel movie. Doghouse is more like dogshit. Avoid it and just rewatch Shaun of the Dead instead.
at Monday, November 21, 2011

Email ThisBlogThis!Share to TwitterShare to FacebookShare to Pinterest
Labels: doghouse