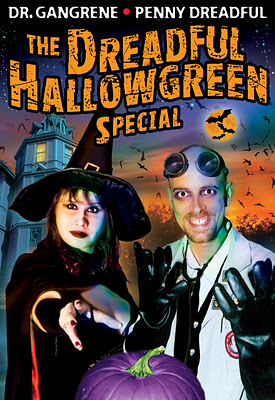 NASHVILLE, TN (11.20.2011) The Nashville/Midsouth Chapter of The National Academy of Television Arts and Sciences  announced their Midsouth Regional EMMY Award nominations on Friday, November 18, at a party hosted by Broadcast Music Incorporated (BMI) on Nashville’s legendary Music Row. Among the nominations were three for the creative minds behind television horror host, Dr. Gangrene.

Larry Underwood & Cameron McCasland picked up an EMMY nomination in the Entertainment category for the made for television movie “The Dreadful Hallowgreen Special” as well as two more nominations for Best PSA Campaign, and Best Short Form Writer for the “Go Green With Dr. Gangrene” series.

The good doctor said of the nomination, “This is a huge honor and it's great to see all our hard work appreciated. A big thanks to all the cast and crew who helped make these projects possible. We had a lot of fun with them and look forward to more horrific projects and collaborations in the future."
The Dreadful Hallowgreen Special pairs TV horror hosts Penny Dreadful & Dr. Gangrene together. The duo finds themselves readying for the upcoming Halloween season when suddenly all things go awry. It’s up to the physician of fright, Dr. Gangrene, and the eerie enchantress, Penny Dreadful, to set things right and save Halloween for everyone in this half hour special. Narrated by Washington DC’s legendary horror host Count Gore De Vol, this Halloween treat is packed with fright.

The “Go Green With Dr. Gangrene” series is a continuing collaboration between Underwood and McCasland and provides ways to make a safer, cleaner planet while using a horror theme as their backdrop. The 2011 installment featured Frankensteins monster, The Werewolf of Nashville, and The Creature from the Nashville Lagoon. The three newest shorts entitled, “Wolfbite”, “Creature Cooler”, and “Heating Up” provide tips on conserving the planet by cutting down on excessive waste, littering, and keeping tabs on pets. All three were filmed in and around Nashville landmarks, and are shot in glorious black & white as a loving nod to the classic monster films of yesteryear. McCasland was previously nominated for an EMMY in the Best Short Form Writer category for his work on “Go Green With Dr. Gangrene” in both 2008 and 2009.
McCasland said of the nomination, “We’re just so happy that people like our show. Dreadful Hallowgreen was such a blast to make, and I'm not sure if we could ever pull something like that off again. Go Green has been a great joy for me to work on, and this past year even more so, as I got to bring in a lot of people who I had worked with in the past to play small parts. We’re just out there with rubber monster masks, and people seem to love it.”

The Dreadful Hallowgreen Special is distributed in the U.S. on home video and DVD by Alpha New Cinema. It premiered locally in Nashville on WNAB CW58 during Halloween weekend 2010, and was syndicated around the country. The made for television movie is a co-production of Shackle Island Studios and Peculiar Productions.

The 26th Annual Midsouth Emmy Awards will be announced during a live telecast in Nashville on March 17, 2012 at the Schermerhorn Symphony Center. For a full list of this year’s nominees please visit http://nashville.emmyonline.org/

Jennifer Lane of Decosimo Vaden. CPAs, who tabulated the ballots, announced that the 700 entries for the Midsouth Emmy Awards were judged by the Chicago/Midwest Chapter, the Mid-America Chapter based in St. Louis, the Mid-Atlantic Chapter based in Philadelphia, and the New York Chapter. She said Sixty-five television stations, production companies, and independent producers are named on the list of nominations.

Larry Underwood is an award winning writer and television producer. Outside of his role of Dr. Gangrene , he writes a regular column for Scary Monsters Magazine and daily musings in his Tales From The Lab Blog at drgangrene.com. Recently he was featured on the cover of Nashville Scene Magazine and in four color ink solving crimes alongside Dick Tracy in the classic comic strip.

Cameron McCasland is an Emmy nominated film maker from Edgewood Texas who has called Nashville home since 2001. His work has been seen on MTV, CMT, and film festivals around the globe. His upcoming feature film “The Lashman” is currently in post production.


Founded in 1957 The National Academy of Television Arts & Sciences is a non-profit, professional organization dedicated to fostering excellence in television. The academy has 19 chapters with 15,000 members nationwide.
at Monday, November 21, 2011