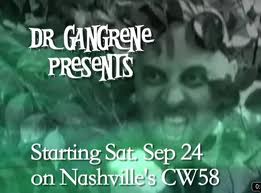 This week's episode of Dr. Gangrene Presents marks the 20th consecutive episode of this season. Our show has been on the air since 1999 – we started on cable access but after a few years moved onto broadcast television. We’ve had a number of formats and timeslots over the years, and settled into our new timeslot at 1am Sat nights/Sun mornings on Nashville’s CW58 this past September.
This time around my program director said no reruns (not counting the 2 times the station played the wrong episode – but that was THEIR mistake), so we'll have to just keep churning out new episodes regularly. One thing is for sure; with no reruns we’ll definitely have more episodes in this season than any previous one!
at Monday, February 27, 2012