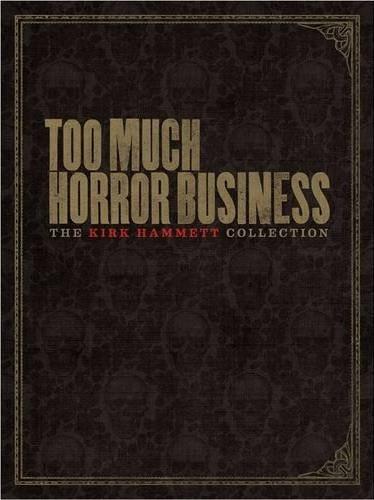 Kirk Hammett, guitarist for a little band you may have heard of called Metallica, is in the process of putting together a book featuring photos of his massive collection of horror memorabilia. Kirk has been a lifelong classic horror fan and often plays onstage with guitars featuring classic horror imagery such as BRIDE OF FRANKENSTEIN, DRACULA or THE MUMMY. He appeared on THAT METAL SHOW talking about his upcoming book, to be titled TOO MUCH HORROR BUSINESS (a nice nod to punk rock horror pioneers Misfits). While there he showed off a 2-page spread from the upcoming book featuring two amazing pieces  - Karloff's outfit from THE BLACK CAT (1934) and Lugosi's outfit from WHITE ZOMBIE (1932). He keeps them on life-size dummies of the two actors - naturally! No release date for the book has been announced but it will no doubt be of interest to both horror and rock fans alike. Can't wait to see what all else Kirk owns! One question I really wish the hosts had asked - and Kirk, if you happen to see this feel free to post a response - have you ever worn those costumes? I bet I know the answer!

Email ThisBlogThis!Share to TwitterShare to FacebookShare to Pinterest
Labels: Kirk Hammett, that metal show, too much horror business