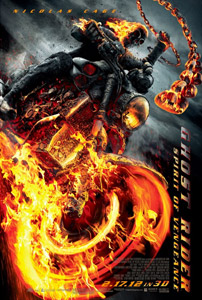 I got a chance to catch Ghost Rider 2 today and although I didn't have high expectations going in it was still pretty bad. For the life of me I swear I don't understand how Nick Cage gets these parts. He was laugh out loud bad at one place in the film, and in fact both myself and a man a few rows behind me did just that. There was a strange animated narrative the film cut away to a couple of times to advance the story that was  odd and overall the story was predictable and uninspired. The animation was pretty good for the most part but they used a jerky fast-motion effect on the rider from time to time that was irritating. It seemed like the filmmakers were trying to make this more of a horror film than a superhero movie, and as such it  betrayed the source material... and in a telling moment of just that very thing the obligatory Marvel Comics logo at the beginning of the movie was missing. Can't say I blame them for that.

Definitely skip this one, and go see Woman in Black instead, a real scary movie.
at Sunday, February 19, 2012