As I mentioned yesterday, my favorite thing about the Rondos is discovering new works that I'd probably not see if they weren't spotlighted in this award. It's going to take me a while to check out the links to all the nominees, but that's where the fun comes in. I wanted to share with you guys one of the nominees in the Best Independent Film Category: 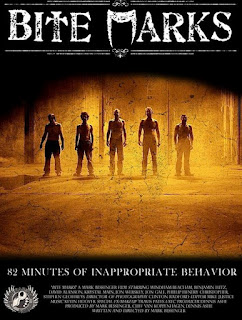 It's called Bite Marks, and it's written and directed by Mark Bessenger, a first time film maker. It is, as you can guess from the title, a vampire movie. A big rig carrying a load of coffins, which later turns out to be a single coffin, stops to pick up a pair of hitchhikers. Along the way they pull over at a truck stop and things get out of hand quickly when the occupant of said coffin awakes.

The producers of this film are obviously big fans of Fright Night. There is a character named Brewster in this film and I also spotted actor Stephen Geoffreys in the trailer as well. He's the guy who played Evil in the original Fright Night. This film looks like it's a hoot. Nicely shot, a decent budget and my only complaint about the trailer is that some of the music in it is pretty bad. But this definitely looks like one I worth tracking down.