To The Devil A Daughter 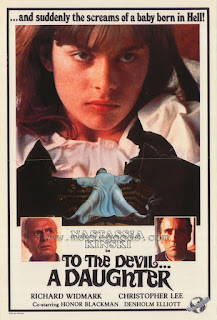 After listening to a couple of episodes of the 1951 Down Place podcast I got to thinking about the films of Hammer Studios. I’ve seen a large number of Hammer films – or so I thought, until I looked at a complete Hammer filmography. The studio had a ridiculous output between the 1950s – 1970s, and even made some films in the 1930s and 1940s. All of the Hammer pictures I’ve seen are horror or science fiction themed, but early on they made a lot of drama and thrillers. In 1953 Hammer stepped into the Science Fiction realm with THE FOUR SIDED TRIANGLE and SPACEWAYS, but it wasn’t until 1958 they entered into the horror arena with HORROR OF DRACULA. This would, of course, become the genre Hammer is known for and identified with. “Hammer Red” is a descriptive term that kind of says it all. Horror, blood, rich colors - Hammer.
The very last Hammer horror picture (before the current revival films) was the 1976 film To THE DEVIL A DAUGHTER. It features a terrific cast - Christopher Lee, Richard Widmark, Honor Blackman, Nastassja Kinski and Denholm Elliot. It’s based on a novel by British author Dennis Wheatley, who wrote a number of books on the subject of Satanism and witchcraft, both fiction and non-fiction. Two other novels of his were also adapted by Hammer Studios – THE LOST CONTINENT and THE DEVIL RIDES OUT. 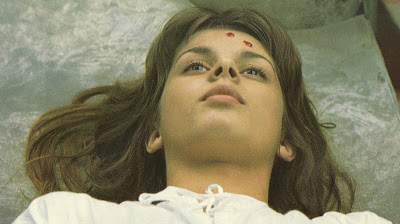 Nastassja Kinski was only 15 years old at the time she made this film, which is kind of shocking considering there is a full frontal nude scene and sexual content. This definitely wouldn’t fly in today’s day and age. Nastassja has since said she felt exploited in her younger age and rightfully so. Well documented pedophile Roman Polanski had a romantic relationship with the under aged Kinski, reportedly beginning sometime after To The Devil A Daughter and ending after she starred in the Polanski film TESS. Undoubtedly Kinski caught his eye in TTDAD, a film similar in theme to Polanski’s Rosemary’s Baby. As the father of a 15 year old I can’t understand how her mother allowed these things to occur – undoubtedly the sway of money and glamour of Hollywood was compelling – but that’s YOUR DAUGHTER, man! In a PEOPLE magazine article from 1981 Kinski says, about her mother, “She always trusted me. When I was 12, she let me loose like a wild animal. I needed that. She knew I had good instincts and would not go into drugs or wrong roads." But at age 12 kids don’t have good instincts, and that is what a parent’s job is, to protect them from predators like Polanski. Kinski defended Polanski, saying "He was really a gentleman, not at all like the things I had heard," she continues. "He introduced me to beautiful books, plays, movies. He educated me." All part of the con game, which Polanski was good at, manipulating a young child like actors on a set to get what he wanted. I’m really amazed at how open the entire Polanski relationship was. That People article reports it very matter of fact, as if they were describing a trip to the grocery store, not a sexual assault by a 43 year old upon a 15 year old. Unbelievable. How many children did Polanski assault before his ultimate arrest? As Lloyd Kauffman told me in an interview, “In America they give you an Academy Award for being a pedophile.” 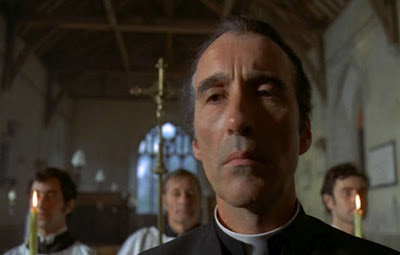 As for TO THE DEVIL A DAUGHTER, it isn’t one of Hammer’s best pictures. That’s not to say it is a BAD film – in fact I liked it. But the story apparently strayed so far from writer Dennis Wheatley’s novel that he hated it and refused to let them option any further stories. The story involves a demon cult that has raised a young girl (Kinski) from birth to become the vessel for their dark lord, Astaroth, that he might walk on the earth as a mortal. The leader of this cult is, naturally, played by Christopher Lee. There are some nice scenes of supernatural spookiness but overall the film is a little slow paced and falls apart at the end. I’ve read reports that the script was being written up until the last minute, changes made practically on-set. The main plot is a bit confusing – a female cult member has a baby that is a deformed fetus looking demon creature. The cult brings Kinski to the altar, kills the demon baby, and spills its blood so it can live inside her body. Huh? If the creature is already alive why the need to kill it so it can live inside another person? I didn’t get that – and it really didn’t matter. The film was enjoyable for the performances, the atmosphere, and the sets. The story was good up to a point then you have to sort of just go with it, overlook the fake puppet baby - especially when it’s humping Nastassja in a particularly gross and laughable dream sequence – and just enjoy the ride.

Hammer threw in the towel shortly after this. Their time was up and it wouldn’t be until the late 2000s that they would begin making pictures again. So far I’m happy with the direction of the new Hammer Studios. They’re making wise decisions on movie choices, and staying away from Frankenstein and Dracula for the time being. I think they’re smart to reestablish themselves as a quality studio making solid pictures before they revisit any older franchises – IF they even ever decide to go there. Perhaps they’re wiser to just let the past rest in peace and move on into the future with fresh films instead of “reimaginings.”

Email ThisBlogThis!Share to TwitterShare to FacebookShare to Pinterest
Labels: christopher lee, hammer studios, To The Devil A Daughter