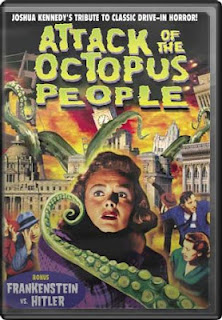 One of the nominees for Best Short Film in the 10th annual Rondo Awards comes from writer/director Joshua Kennedy.  It is a black and white movie called ATTACK OF THE OCTOPUS PEOPLE that is a loving tribute to the giant monster movies of the 1950s that also gives a knowing nod to the film noir detective genre. The plot involves strange octopus creatures attacking mankind. Oh, and did I mention Joshua is 16 years old?

Listen folks, this is what the Rondo Awards are all about. A 16 year old kid who has an obvious love of classic horror made his own movie that references Harryhausen, Corman, Castle and more. Yeah, it's shot on video, made with no budget and features a cast of mostly kid actors - but so what? That is exactly the charm of it.

How awesome is it that a kid would go out of his way to make something like this, especially in today's attention deficit society? Is this kid going to win? Probably not. But just having his work nominated has to be a huge morale booster for Joshua, and rightly so. Keep up the good work Joshua! I understand you've already started on your next film, CURSE OF THE INSECT WOMAN. I look forward to it! Best of luck and by the way, folks, this film is available on Alpha Video packaged with another short called Frankenstein vs. Hitler. Support a rising young dirwector and go pick up a copy today and kudos to Alpha for distributing this!
http://www.oldies.com/product-view/1069D.html

Email ThisBlogThis!Share to TwitterShare to FacebookShare to Pinterest
Labels: attack of the octopus people, Joshua Kennedy