Even a Man Who is Pure of Heart...

may become a wolf when the wolfbane blooms

and the autumn moon is bright.

Thus goes the poem repeated several times throughout the original Wolf Man movie. But where did this come from? Here is writer Curt Siodmak speaking about this very subject in an interview:

“I made that ditty up. Now people believe it is part of European Folklore…” 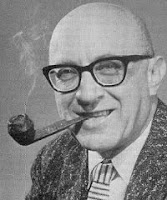 Curt Siodmak was born August 10, 1902 in Germany. He moved to America with his brother Robert and moved to Hollywood in 1937. They both worked in Hollywood, writing for movies and tevevision. Curt wrote screenplays for an incredible list of Science-Fiction and Horror films, including: The Invisible Man Returns, The Invisible Woman, The Ape, Black Friday, The Wolf Man, The Invisible Agent, Son of Dracula, I Walked with a Zombie, Frankenstein Meets the Wolf Man , House of Frankenstein, The Beast with Five Fingers, and many more.

Growing up in Europe gave Curt a unique perspective when it came to writing, and tapping into folklore and traditions of Europe no doubt had an influence on the fairy-tale like quality I’ve always felt The Wolf Man movie had about it. Here is Curt speaking about that very subject:

“But these stories also have a deep atavistic meaning. They appeal to our hidden basic instincts which we remember subconsciously since the time our forefathers lives in caves. Man wanted to identify himself with the strongest animal he feared. The wolf was the most dangerous animal in Europe at that time. So, there was the Tigerman in India, the Snakeman in the Pacific. The fairytales are in my opinion the fear of winter. Little Red Riding Hood is swallowed by the bad wolf-the winter-the young hunter, spring, frees her and kills the winter with its cold and hunger. Sleeping Beauty has the same theme: the bad witch-winter-poisons her. Spring, the young prince kills the witch, Sleeping Beauty coughs up the poisoned apple, comes back to life and the thorns start blooming with a million roses. Very poetic!”

Curt was an interesting man who later moved to directing. He even had a small part as an extra in Metropolis. The story goes that while working as a reporter in Germany he attempted to interview director Fritz Lang. This led to his role as an extra as a workman in that 1927 Fritz Lang classic.
at Friday, January 15, 2010