A Werewolf’s Best Friend is His Dog 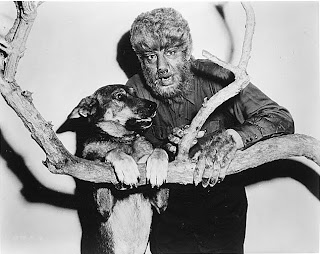 There is just something about Lon Chaney Jr. that, despite his drinking and personal problems, makes him a lovable guy. And these pictures demonstrate that beautifully. 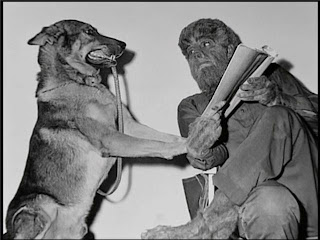 I just don’t trust folks who don’t like dogs.  Dogs are honest and loyal, and always happy to see you. With a dog there's no pretensions - what you see is what you get. They are sweet, lovable, and kind companions, and honestly, I like them better than most people. And I think Lon Chaney Jr. probably felt the same way. 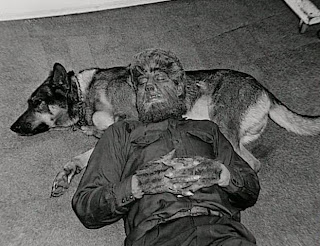 That’s Moose the dog in these pictures with Lon, taken on the set at various films. What a job, where you can take your dog to work with you! Moose was Lon’s faithful companion for a number of years, and reportedly even made screen appearances in at least two Universal horror films, The Wolf Man and Frankenstein Meets the Wolf Man. In The Wolf Man he played the wolf that bit Larry Talbot and gave him the terrible curse of Lyncanthropy. 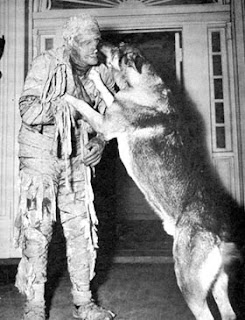 It is obvious from looking at these stills that Lon felt a lot of love for Moose and they shared a deep connection. During the filming of The Cobra Woman in 1944 Moose was hit by a truck at the studio and killed. Not sure what age Moose was at this time,  but it was surely a sad day for Lon and quite a blow. 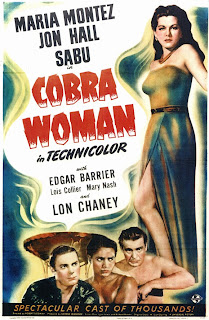 Below is a shot of me with two of my furry buddies, Kirby (named for comic book artist Jack Kirby) and Kelly. I unfortunately lost both of these dogs over the past year, but they, like Moose, lived happy lives. Here’s to Moose, the Shepherd, and Kelly and Kirby the Dalmatians. I miss you guys. 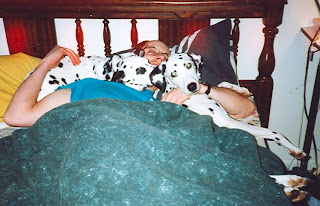