Over the next few weeks I'll be looking at the Wolf Man film, Lon Chaney Jr., and Jack Pierce. To kick off the month long celebration, below is an article by Universal employee and major Monster-kid Scott Essman. Scott has worked hard to keep classic monsters alive and well, and this is just one of many such articles he's written on all the creatures we know and love. Enjoy! 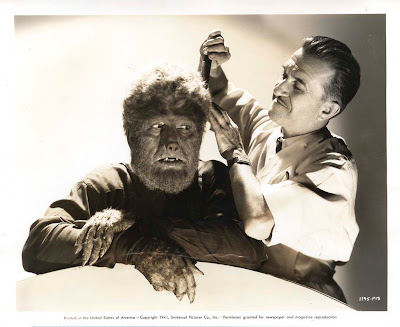 The long-awaited release of Universal Studios’ 2010 version of The Wolfman conjures the history of the men who made the original horror films at the studio in the 1920s through the 1940s. Not only was the original 1941 film The Wolf Man key among them, but the rich history of the other films is directly tied into both why and how that film was created.

In 1928, after his father had appointed 21-year-old Carl Laemmle, Jr. as head of production at Universal Studios, the machinery was in place for a new wave of films based on classic horror stories. By 1931, the studio had both Dracula and Frankenstein as two of its greatest successes, and they followed those up with a few more early 1930s originals, including The Mummy and The Invisible Man.

By 1935, they had produced Werewolf of London, their first film based on the Loup-Garou stories from France of men who turned into wolves at the turning of a full moon. When the Laemmles left the studio in 1937, Universal seemed doomed to a slate of poorly produced sequels to the great films of the Laemmle era as quickly churned out sequels to Dracula, Frankenstein, and The Mummy arrived in droves. However, there was one exception to the rule which arrived in 1941 which would set a new standard and ultimately be ranked with the greatest of the Universal horror classics.

As the 1940s began, horror movies were beginning to take a back seat to sweeping romantic dramas and comedies. But one intended B picture was the landmark The Wolf Man, reestablishing the horror genre at Universal. The film was originally meant for Boris Karloff some ten years earlier, but by 1941, when Karloff had moved onto mad scientists and other older characters, a new actor was positioned as the new Karloff at the studio. His name was Lon Chaney, Jr. Until the late 1930s, the younger Chaney had been less heralded than his silent movie superstar father, but his appearance in 1939’s adaptation of Of Mice and Men put him on the cinematic map. Chaney, Jr. was a star in the making and Universal snapped him up for a run of horror films that lasted throughout the 1940s. With Jack Pierce’s innovative makeup - a more thorough lycanthrope overhaul of Chaney Jr.’s face than had been utilized on Henry Hull in Werewolf of London - The Wolf Man was a remarkable horror movie character and equally as memorable as Karloff’s Frankenstein Monster and Mummy and Bela Lugosi’s Dracula.

In addition to the team of Jack Pierce, director George Waggner, and visual effects wizard John P. Fulton, the craftsmanship of The Wolf Man was also entrusted to editor Ted J. Kent, A.C.E . Of all the monster movie editors, none was more prolific than Kent, an in-house editor at Universal for over a quarter century. Kent's monster tenure spanned no fewer than five ownership changes at the studio. Though research dictates no clear reason for the change, Universal assigned Kent to James Whale's follow-up to The Old Dark House, which had been competently edited by Clarence Kolster and was released only a year after Frankenstein. This film, released in 1933, The Invisible Man, would prove among Whale’s most challenging films, with equal contributions by Kent and Fulton. No doubt, both Universal and Whale were enamored with Kent's work, and he cut three of Whale's last several films with Universal, including Show Boat in 1936 and The Road Back in 1937. But the one film that elevated Whale's reputation beyond that which his earlier films offered him was a picture he didn't even want to make.

By 1935, the idea of The Bride of Frankenstein didn't appeal to the man who was wary of being labeled a horror director. Nonetheless, many consider Whale's long-overdue sequel to be superior to the original Frankenstein with its mixture of unforgettable sequences, demonic characters, and wistful comedy. In a likely homage to Clarence Kolster's work on that first film, Kent cut Bride in similar fashion, most notably in the reveal of Elsa Lanchester's hideous title character in the final scenes; we see her in the same three matching closeups that Kolster implemented so effectively to show us Karloff's monster in the original film. Even after Whale and the Laemmles departed Universal, Kent was recruited by studio brass to cut 1939's final sequel with Karloff as the monster, Son of Frankenstein, featuring a towering performance by Bela Lugosi as Ygor that Kent surely played up in the editing room. He even cut Vincent Price's 1938 debut film, Service de Luxe! But though he likely didn't realize it then, Kent's Universal career was just starting to peak.

For the Waggner Wolf Man film, slated as a B-picture by the Universal brass, Pierce and Fulton knew that they had an opportunity to create a unique project that would harken back to the old Laemmle years at the studio. In Chaney, they had the hulking physical actor who could be used to realize their ideas. With The Wolf Man, Kent, along with major contributions by studio mainstays Pierce and Fulton, created the film's showpiece "transformation" sequences which became standard fare in the many spin-offs that followed. Witness the lap dissolves that Kent and Fulton implemented for transformations from man to wolf, and especially, in the film’s tragic climax, from wolf back to man. Kent also cleverly orchestrated the noted end of the film where Claude Rains unknowingly beats his own son with a silver-tipped cane, later realizing that it was his own flesh that he killed. In their tussle, an especially marked cut to a close shot of Chaney, Jr. as the Wolf Man struggling with Rains makes for one of the film’s most fascinating moments.

During pre-production of The Wolf Man, Jack Pierce worked diligently to create the makeup for the title character, having been disappointed with his reduced makeup for Henry Hull in Werewolf of London. Pierce pulled out all the stops for The Wolf Man with Lon Chaney, Jr. in the title role. Though the two did not reportedly get along--Chaney did not like wearing the makeup or undergoing the lengthy application and removal period--Pierce excelled again with his werewolf concept, utilizing a design he had created for Boris Karloff a decade earlier when the Laemmles were planning a werewolf film. Thus, even though it was originally intended as a B movie, The Wolf Man was a true horror classic, and Pierce's version of the character has been the model for the numerous werewolves that have since come to the screen.

The idea of Jack Pierce re-creating a wolf character from scratch every day of principal photography may seem daunting, but — as with the Frankenstein Monster and the Mummy before — Pierce prided himself on doing things from the bottom up with each new makeup application. “I don’t use masks or any appliances whatsoever,” proclaimed Jack Pierce about the development of his famous monster characters. The one exception to Pierce’s rule occurred with his striking initial realization of The Wolf Man in 1941. “The only appliances I used was the nose that looks like a wolf[‘s nose]. There you either put on a rubber nose or model the nose every day, which would have taken too long. It took 2 1/2 hours to apply this makeup,” Pierce said, indicating the head, chest piece and hands. “I put all of the hair on a little row at a time. After the hair is on, you curl it, then singe it, burn it, to look like an animal that’s been out in the woods. It had to be done every morning.” Pierce’s other key characters in The Wolf Man included 1940s “scream queen” Evelyn Ankers as Gwen Conliffe, Claude Rains as Sir John Talbot, Béla Lugosi as Béla the gypsy, and Maria Ouspenskaya as Maleva, the gypsy woman. As a result of Pierce’s methods, audiences were treated to the perfectionism in The Wolf Man.

Alas, what might have been was never realized with the stunning originality and critical and commercial success of The Wolf Man. As the U.S. entered WWII, a slew of sequels and remakes of the original horror films were cranked out at Universal with few standouts as momentous as their antecedents. Pierce went on to create the Wolf Man character in succeeding sequels, including Frankenstein Meets the Wolf Man (1943), and both House of Frankenstein (1944) and House of Dracula (1945). The latter, originally titled “The Wolf Man’s Cure” featured an end to the cycle of appearances by the Wolf Man in Universal films, but the character would inexplicably re-appear in Abbott and Costello Meet Frankenstein three years later. By that point, Bud Westmore was supervising makeup artists Jack Kevan (the Frankenstein Monster) and Emile LaVigne (the Wolf Man) in their execution of Jack Pierce’s original designs. The classic monster movie era, in effect, was over.

Upon the occasion of Jack Pierce’s death in 1968 and Ted Kent’s death in 1986, the last of the monster makers were gone, but their work continues to live on again and again, as new audiences begin to discover their treasured films. Perhaps with the fresh perspective now available to audiences with Universal's recent re-release of many of the classic horror films on DVD, including a new Legacy Collection of The Wolf Man (1941) due on DVD from Universal Studios Home Entertainment in winter, 2010, the talented craftspeople who realized these films will ultimately be recognized for their singular efforts. Alongside the collection of actors, directors and executives responsible for Universal's great horror collection, editors including Kent deserve due credit for bringing the original monsters and their movies to life.
at Thursday, January 07, 2010