He has this effect on all the ladies... 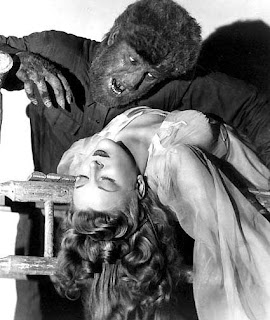 A lot has been made of the problems between Lon Chaney and Evelyn Ankers. The two just did not get along all that well... which is interesting because Universal kept casting them in movies together, in a total of 8 films. After the Wolf Man Evelyn swore she'd never work with Lon again, but they made two films together the very next year, two more in 43, two more in 44, and one in 45. Their on-screen chemistry really does work, and audiences obviously loved the duo together.

Films they co-starred in: